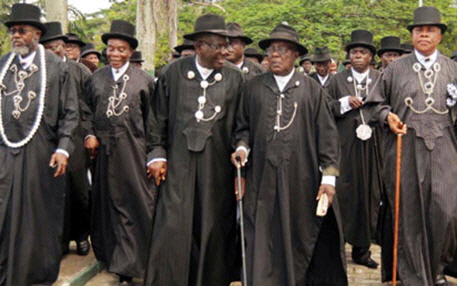 The Elders and Traditional Rulers of Nembe Kingdom, in Nembe Local Government Areas of Bayelsa State, have exposed, in a petition they sent to President Muhammad Buhari, the shady business deal involving among others, the secret sales of oil and gas reserves from the Area by the Shell Petroleum Development Company (SPDC) without the involvement of the indigenes.

The Nembe kingdom is one of the biggest on-shore oil producing communities in the Niger Delta, with the oil mining lease (OML) 29 producing over 150, 000 barrels of crude oil per day. The oil block covers an area of 983 square kilometres.

In the petition titled “SHELL’S CLANDESTINE SALE OF OUR OIL AND GAS RESERVES THAT DEMANDED FOR TRANSPARENCY, DUE PROCESS AND WHICH WAS DEVOID OF ANY CONSULTATION: A DEMAND FOR OUR COMMUNITY’S PARTICIPATION AND OUR RIGHT TO EQUITY SHARES IN SHELL’S SALE OF ITS ASSETS”, the community claimed that the action of the SPDC to exclude the Communities is an insult and a provocative stance that could disrupt oil exploration in the Area.

The petition was made available to newsmen yesterday in Yenagoa, and signed by the Chairman of the Nembe Oil and Gas Committee, Chief (Amb.) Nengi James – Eriworio, and the Secretary, Chief Austin Aye Martins- Gboro,

“the writing of this petition, therefore, became imperatively necessary in the light of the fact that, we as a community was never consulted or informed of the outright sale of our God given natural resources as regards our reserves of oil and gas.”

” We just woke up one morning and started reading in the newspapers and the electronic media that our oil fields have been sold by Shell Petroleum Development Company Limited (SPDC) and acquired by an unknown company – Aiteo Eastern Exploration and production company limited involving the acquisition of SPDC’S thirty percent (30%) stake in our oil mining lease (OML) 29 and the Nembe Creek Trunk line (NCTL) under the latest shell’s divestment policy of empowering indigenous oil companies as enunciated in the lurch to suffer for all the ‘sins’ committed by Shell in our environment. This smacks of impunity as it is not done in line with global best practices.”

“The problem of this clandestine sale without prior consent and or consultation of the custodians of the oil fields to Aiteo to boost indigenous companies in the upstream sub-sector of the oil and gas industry, have produced a lacuna that the sale had not taken care of. During the time of shell’s operations in the Nembe environment over the years, our land had been totally devastated and degraded which was occasioned by incessant oil spills that called for clean-ups and remediation of the environment. Shell was responsible for these anomalies and as a result of their negligent behavior. That is why it beats our imaginations that nothing was made known to us, as a community that had shouldered these hazards of oil exploration and exploitation.

“Apart from the devastated and degraded environment that has been unwittingly left behind to our detriment, there were also the issues of mutual agreements entered into between the company and the community. These were memoranda of understanding that ensured the provision of amenities to the community and contracts to local contractors. These were things done to mitigate the effects of their oil exploration and exploitation activities; and to give the people a sense of belonging and to create harmonious company/community relations.”

“The above outstanding and unresolved problems have since remained, and no explanations have been given as to how they would be resolved. That is why our people have been seriously aggrieved of the sale without our knowledge: express our misgivings over certain aspects of the sale; and even make a protest on certain areas that we may have found repugnant to our collective aspirations as a people. Rather our voices were suppressed, sidelined, and now, we simply standby to watch the complete devastation and annihilation of our age-long economic, social and cultural heritage.”

“Indeed what is the meaning of Nigerian Content development without taking cognizance of the feelings of the people that are in custody of the oil and gas reserves? So in all these, where did the people stand to gain? In fact what are the supposed benefits of the goose that lays the golden eggs? In the circumstance we find ourselves, it is our onerous resolve and demand that SHELL and AITEO must consult us to tie all loose ends of this unfortunate sale, with a view to including the Nembe Community as stakeholders and as partners in progress.”

“This is the only fair thing to do. We should be given a room to participate as stakeholders in the indigenous companies’ participation in the upstream sub-sector of the oil and gas industry. We must be given equity shares as the original local indigenous owners of the oil and gas reserves: otherwise, the local content development policy will not have any meaning.It is a fact that, it is only when we are given a room to participate that we are going to give our total support and our community’s good will, to the sale that is skewed against us. What we are saying is that, there ought to be openness, fairness, justice and equity. A role must be carved out for our people in the value chain of activities compressing acquisition, exploration and product in the oil and gas industry. This is the end of our sad story.” [myad]