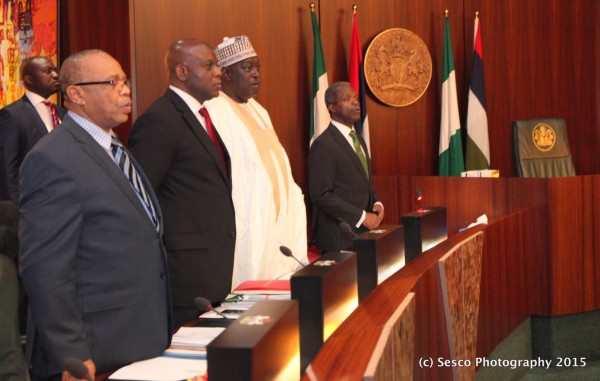 At its meeting presided over by the Vice President, Prof. Yemi Osinbajo, SAN,
The National Economic Council (NEC), today, Thursday, embraced a new funding regime for the oil and gas industry, as it cancelled the cash call regime which has dragged the industry in about a decade.
This is one of the highlights of today’s meeting of NEC, which was presided over by Vice President Yemi Osinbajo at the Aso Presidential Vialla, Abuja. It is the constitutional body set up to advice the president on the economic affairs of the federation. It comprises of the governors of the 36 states of the federation and the Central Bank governor.
The alternative funding stream has been approved earlier this week at the Federal Executive Council meeting on Wednesday and then presented today to NEC, as the body mandated to come up with “measures necessary for the coordination of the economic planning efforts or economic programmes of the various Governments of the Federation.”
ENERGIZING THE MICRO, SMALL AND MEDIUM ENTERPRISES (MSMES) SECTOR AS MAJOR ECONOMIC GROWTH DRIVE
PRESENTATION BY THE CBN GOVERNOR ON FINANCING OPPORTUNITIES CRITICAL FOR MSMES DEVELOPMENT
MEMORANDUM ON THE ADOPTION OF SUSTAINABLE OPTION FOR FUNDING JOINT VENTURE CASH CALLS BY THE HONOURABLE MINISTER OF STATE, PETROLEUM RESOURCES
Minister of State for Petroleum Resources, Dr. Ibe Kachikwu stated that the current upstream Joint Venture arrangement in the Nigeria’s oil and gas industry is unincorporated Joint Venture (UJV) meaning that NNPC and the International Oil Companies (IOCs) partner in each Joint Venture as unique and separate legal entities.
REPORT ON THE EXCESS CRUDE PROCEEDS PRESENTED BY THE HONOURABLE MINISTER OF FINANCE
UPDATE ON BUDGET SUPPORT LOAN FACILITY
LONG TERM FINANCIAL ABUSES BY SOME REVENUE GENERATING AGENCIES
ECOLOGICAL FUND