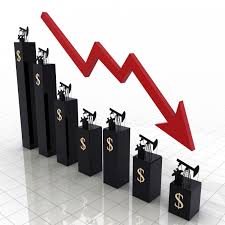 Brent crude futures fell below $60, posing a threat to Nigeria’s 2020 budget, which put oil benchmark at $60 per barrel, as the spread of the coronavirus in China continues to affect demand due to restrictions placed on travel.
The bearish performance for the Brent crude continued as it further dropped 2.14 percent equivalent to $1.31 to trade at $59.97 per barrel on Friday night at the global market.
Also, the US West Texas Intermediate (WTI) crude further moved down by 2.32 percent or $1.29 to trade at $54.30 per barrel. This performance was the lowest settlement for the American futures since November last year.
During the preparation of the country’s budget, oil prices were pegged at $60 per barrel because global economy issues like the US-China trade deal and the US-Iran conflict had helped prices moved up.
However, with this unforeseen circumstances, the country’s hope of raising revenue to fund the this year’s budget is already under threat because the sale of the commodity is the main source of foreign exchange earnings for Nigeria.
This week started on the bullish note for oil prices, after military forces in Libya blocked oilfields which threatened to cut off the entire 1.2 million barrels per day oil production of the African OPEC member.
But on Tuesday, despite the continued blockade in Libya, oil prices started to slip as market faced a new challenge over the deadly coronavirus in China, which, analysts say could cut oil demand as travel restrictions in and around the area of the outbreak are already in place.
The SARS CoV, better known as the SARS Coronavirus, is highly contagious and has put two Chinese cities on lockdown since Thursday as health authorities around the world scramble to prevent a global pandemic.
The coronavirus outbreak has so far killed 17 people and infected more than 800 people and to prevent this, a widespread travel restriction has followed, reducing regional travel meaning that the oil market could see a drop of 260,000 barrels per day in the global oil demand market—170,000 bpd of which would be in the form of jet fuel.
The virus has spread to South Korea, Japan, Thailand, Vietnam and the United States, among other places. On Friday, the CDC confirmed the second case in the United States and this may further threaten oil prices even with certain trends which normally helped prices took the backseat such as reports by the US Energy Information Administration (EIA) that inventory fell by 400,000 barrels for the week ending January 17.
Even despite the disruption caused by the virus, the oil market is also faced by concerns of oversupply, as the International Energy Agency (IEA) said it there is expectations of a surplus of 1 million barrels per day in the first half of the year.
Source: Business Post