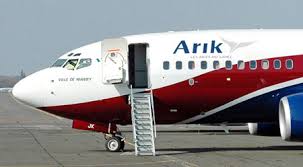 Arik Air passengers, Saturday, refused to board an aircraft, W3 762, PCS/WT ETKT 7255453747522-2, from Nnamdi Azikiwe International Airport, Abuja to Port Harcourt, the Rivers State Capital, because of what they said was the history of the aircraft’s malfunctioning.
It was gathered that the aircraft, which was schedule to take off on Friday, could not do so as it developed a fault which needed to be corrected overnight.
It was learnt that the same aircraft was positioned to fly the same set of passengers on Saturday but still could not start.
One of the passengers, Barrister Wilson Julius who vowed to drag the airline to court, narrated the ordeals of the passengers to our reporter:
“We learnt that the aircraft developed a fault yesterday (Friday) and this morning (Saturday), we arrived for the flight. After boarding the aircraft, we sat in it for about forty minutes with its doors closed and ready to fly, but the aircraft could not start. We didn’t know. We were seated in the Aircraft until when some of us started panting inside as a result of the absence of air.
“The plane did not start. They were struggling to repair it while we were inside. “Finally, we were evacuated and asked to sit inside the departure hall, to wait another flight. At about 10 am, an announcement was made, postponing the take off by one hour. “After all the delay, at about 11.45 am, we were asked to board. But to our surprise, we were taken to the same aircraft that was faulty. We protested, as life has no duplicate.”
Another passenger, who is a social crusader, Walter Duru expressed concern over the development even as he accused the Airline of gross irresponsibility and impunity. He called on relevant authorities to call the airline to order, in order to safeguard the lives of Nigerian air travelers.
The situation became critically in the afternoos yesterday as the aggrieved passengers grounded the entire operations of Arik air, refusing its aircrafts from taking off.
At that point, the Pilot of the Aircraft and a technical staff addressed the angry passengers, telling them that the fault had been fixed.
A staff of the Nigerian Civil Aviation Authority, who gave his name simply as Mohammed, promised to get an NCAA Engineer to inspect and certify the aircraft to ascertain its fitness to fly. But the passengers waited for about three hours without seeing any one as the NCAA Staff disappeared and never returned.
At another point, the Arik Air duty Manager, one Mr. Ogaji, also addressed the passengers by asking them to wait till 4.50 pm so that they would board the next aircraft that was heading to Port Harcourt.
It would be recalled that Arik Air and other Airline operators have, on uncountable occasions, been accused of compromising the safety of Passengers with aircrafts that are not Air-worthy to fly passengers to different destinations..
Efforts to reach the Management of Arik Air for official comments proved abortive. [myad]