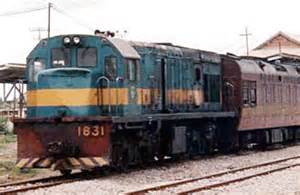 The ruling Peoples Democratic Party (PDP) Presidential Campaign Organisation and the opposition All Progressives Congress (APC) Presidential Campaign Organisation are engaged in a war over President Goodluck Jonathan’s achievements in Nigeria’s railway sector of the Nigeria economy.
While the spokesman of the APC Presidential Campaign Organisation, Garba Shehu described the claim achievements as hoax, his PDP counterpart, Femi Fani-Kayode described the APC assessment as laughable.
Fani-Kayode, in his response to Garba Shehu said that for APC to resort to attacking a verifiable achievement that is on the ground and being enjoyed by millions of Nigerians is not only laughable, but also a clear indication that President Jonathan has completely overwhelmed the APC with the sheer quantum and quality of his achievements in rail and other sectors of the economy.
Fani-Kayode added: “the charge of the APC Presidential Campaign Organisation is mind-boggling considering the contradictions therein. In the same statement where they alleged that the railway sector achievements are a hoax, they themselves on their own readily admit, and I quote, ‘only about 2,000km have so far been rehabilitated.’
“Where then is the hoax, if by the APC’s own admission ‘only about 2,000km have so far been rehabilitated?'”
The PDP Presidential campaign organisation spokesman asked: “is it not a verifiable fact that the railways were completely comatose since the 1980s? Is it also not a fact that it is President Jonathan’s administration that has resuscitated the railways?
“Even the APC informed Nigerians in their statement that tickets for the Lagos-Kano service costs N1,930 per passenger, which is far cheaper than travelling by road or by air. And concerning the dubious allegation that ‘it costs about N10, 000 per passenger to produce that Lagos-Kano service,’ the APC may wish to engage the services of more experienced railway experts who will surely explain that the initial outlay cost of a rail system always repays itself several times over due to the exceedingly long period of usage.
“Talking of purported derailments, that is a grievous insult on the intelligence of Nigerians and, indeed, an evil wish on the part of the APC as derailments often result in loss of lives.  In this day and age, the derailment of even a cargo coach on a train line anywhere in the world attracts instant international attention. So the APC can quit spreading devious lies all in the name of politics.
“The fact that the railway achievements of President Jonathan has drawn such a bitter and untruthful attack from the APC, when millions of Nigerians have enjoyed and are still enjoying the railway service, shows that the APC is very afraid that this is another area where Mr President has touched the lives of the people to which the APC has no answer. And how can they have an answer when the rail projects embarked upon by both Lagos and Rivers states under APC governors are yet to carry a single passenger even after billions of naira have been sunk into both projects?
“Rather than attempt to diminish the verifiable achievements of President Jonathan in the rail sector with untruthful, outlandish claims and devious wishes, the APC needs to tell Nigerians how come the billions of naira sunk into both the Lagos and Rivers states rail projects have yet to result in a single passenger travelling from point A to B.
“Indeed, the only railway hoax in present-day Nigeria was perpetrated by Rotimi Amaechi, the governor of Rivers State who unveiled a purportedly finished monorail project that was soon after discredited to be a photographic scam.  That is the railway hoax the APC should be talking about if its imagination has been fired to talk about railway hoaxes; or the multi-million dollars-Lagos Metroline project, which General Buhari cancelled when he took over government by the barrel of the gun in 1983.” [myad]