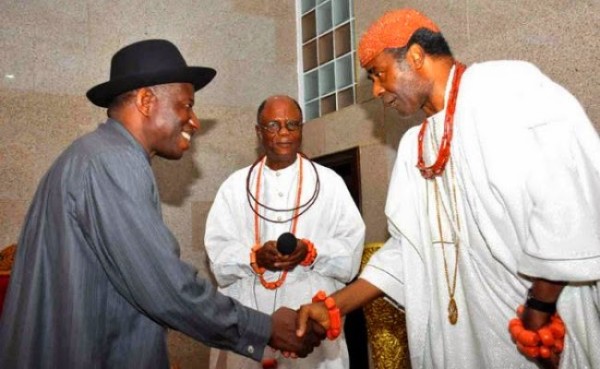 President Goodluck Jonathan has told the Olu, in the presence of his Chiefs, that he had to put off the ground breaking ceremony of the $16 billion Delta Gas City and the Export Processing Zone project (EPZ) because of the fear of outbreak of violence after the ceremony which would have frightened investors.

The President who paid a courtesy call on the Olu of Warri, Ogiame Atuwatse II, in the company of Dr. Uduaghan, during an unscheduled visit to Delta State today said that however that his action in putting off the exercise was not borne out of fear that anything was going to happen to him.

According to him, as a son of the Niger – Delta, he could move freely in the zone without molestation.

The President who also had a private audience with the President of the Christian Association of Nigeria (CAN) Pastor Ayo Oritsejafor, asked Governor Emmanuel Uduaghan to work out another date after the February general elections for the groundbreaking ceremony that was put off.

Governor Uduaghan commended President jonathan’s personal visit to the Olu which has afforded him the opportunity to explain to the Monarch and the Itsekiri people the issues surrounding the ground breaking ceremony of the project.

Uduaghan also expressed appreciation to the Olu on his understanding of the President’s explanation and commitment to the project.

He appealed to groups and individuals to desist from politicizing the ground breaking ceremony, adding: “we join Mr President in our commitment to the success of the project.”