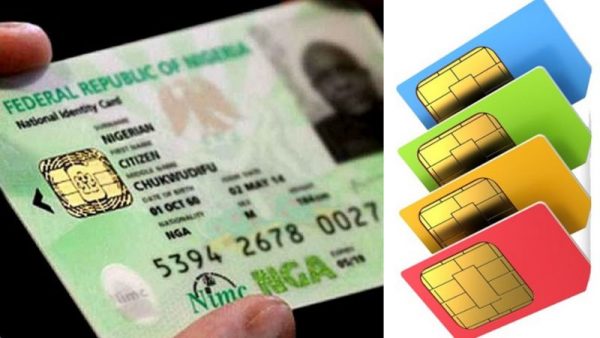 The Nigerian Communications Commission (NCC) has strongly warned telecoms consumers to beware of the danger in linking or sharing their National Identification Number (NIN) to, or link with another person’s Subscriber Identity Module (SIM) cards, no matter how close the person is to them.

The Commission gave the warning during its third run Telecom Consumer Town Hall on Radio (TCTHR) programme, broadcast live on Human Rights Radio, 101.1 FM in Abuja recently. The event was hosted on the platform of ‘NCC Digital Signature on Radio’.

The NCC Digital Signature on Radio is the flagship radio programme of the Commission created to educate the general public on the mandates of the Commission and for sharing salient, consumer-centric and up-to-date information on how NCC is delivering on its mandates.

Speaking during the radio programme focused on ‘the Benefits of NIN-SIM Integration’, NCC’s Director, Consumer Affairs Bureau, Efosa Idehen, said “On no account should a telecom consumer, however circumstanced, allow another person to register a SIM with another person’s NIN.”

Idehen said compliance with this advice will protect the true owner of the NIN from any liabilities or negative consequences arising from the use of other person’s SIM.

During the phone-in segment of the radio programme, which lasted two hours, consumers within Nigeria and in the diaspora, especially from the United Kingdom (UK), Russia and neighbouring countries like Ghana, among others, were able to call and get clarifications on concerns they had regarding the ongoing NIN-SIM integration in Nigeria.

Discussions largely focused on educating consumers on NIN and its purpose, process of obtaining NIN, why consumers are being asked to submit their NIN to their Mobile Network Service Providers, the benefits of NIN-SIM linkage, relationship between NIN and Bank Verification Number (BVN) registration, the step-by-step approach to linking NIN to SIM, and the role and uses of Unstructured Supplementary Service Data (USSD) *346# in the NIN-SIM integration activities.

Efosa was joined in the studio by NCC’s Director, Public Affairs, Dr. Ikechukwu Adinde, who was represented by an Assistant Director in the department, Dr. Omoniyi Ibietan; and a Deputy Director, Projects Department of NCC, Mrs. Nnenna Ukoha, who jointly educated consumers on the various aspects of NIN-SIM integration exercise.

During the radio programme, telecoms consumers were reminded repeatedly of the October 31, 2021 deadline for NIN-SIM integration. The Federal Government had extended the deadline earlier giving for the completion of the NIN-SIM linkage to 31st October 2021.

The two-hour discussion programme, which was also livestreamed on the social media, recorded broader participation than its forerunners due to a combination of the regular radio listenership with viewership on Human Rights Radio’s social media assets. Thus, it achieved NCC’s objective of using a mass medium to expand its reach to telecom consumers to enhance their protection through information sharing, and education in order to improve the quality of consumer experience with telecom services in Nigeria.

Parents Are Allowed To Acquire SIMs For Their Below 18 Year Old Kids, NCC Clarifies

Communications Commission May Have Banned Under 18 Nigerians From Owning SIM