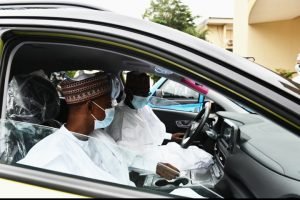 The Minister of the Federal Capital Territory (FCT), Malam Muhammad Musa Bello has unveiled the plan to launch the nation’s capital into electrically powered transportation system in no distant future.
The Minister, who received in audience today, August 1, the management team of the National Automotive Design and Development Council (NADDC), led by its Director General, Jelani Aliyu in his office, said: “we are working towards eliminating the use of diesel buses. Ultimately, my vision and the vision of my team is that really, Abuja should go electric in terms of powering the bus systems and even the motor vehicles as we have seen today.”
Muhammad Musa Bello, who took a test ride in the Hyundai Kona, an electric vehicle assembled in Nigeria, said that the long term plan of the Administration is to develop Abuja into one of the greenest cities in the country and that the use of electric vehicles as a major means of public transportation is a major part of that plan.
He said that in preparing for the new system of transportation, tricycles and motorcycles are being gradually stopped from operating in many parts of the city.
The Minister said that acquisition of the right technology to enable wide use of the electric vehicles requires a lot of planning.
” And as you can see, technology for solar, solar batteries and retention of power, gradually is improving. So, if we start now and imbibe it as a culture, I think it’s a matter of time and we will get there.”
He pledged the support of the FCT Administration to the NADDC in terms of the organization’s requirements for its projects, either directly or through a Public Private Partnership, even as he encouraged them to see Abuja as a good location for all their activities.
Earlier, the Director General of the NADDC had said that his team was in the FCTA to begin discussion with the Administration for a collaboration to make their contribution in making Abuja one of the most advanced and green cities in the world.
He said that the Hyundai Kona is the first ever electric vehicle assembled in Nigeria with a range of about 492 kilometers which could be charged from any electric outlet, adding that it is in respect of the vehicle that the NDDC has developed solar charging stations in Sokoto, Lagos and Nsukka.
The visit also featured presentations from the Stallion Group of Companies on its proposed public transportation solutions.