Home BUSINESS US Announces $33 Billion Investment In Africa At Summit 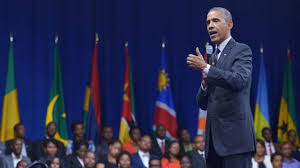 The United States of America has announced a total sum of $33 Billion investment in Africa under what it called Doing Business in Africa (DBIA) campaign. This was the decision taken at the conclusion of a three-day US-African Summit in Washington DC.

President Barak Obama said at the end of the Summit today that the US is offering an additional $7bn of financing through the Doing Business in Africa (DBIA) Campaign to the initial $14 billion which the US companies have pledged to invest in Africa in areas such as energy and infrastructure.

President Obama, who hosted a dinner for the over 40 African heads of states that participated in the Summit, said that the proposed investment is an effort to strengthen US ties with Africa as China increases its African investments.

The investment include the deals that were announced of $5bn partnership between private-equity firm Blackstone and Aliko Dangote, Africa’s richest businessman, for energy infrastructure projects in sub-Saharan Africa, as well as more investments in Mr Obama’s Power Africa initiative.

According to the White House, Power Africa received an additional $12bn in pledges towards its effort to develop energy supplies on Africa through a mix of investment and state involvement.

The World Bank announced a $5bn investment in Power Africa and General Electric said it had committed $2bn to help boost infrastructure and access to energy.

“We gave it to the Europeans first and to the Chinese later, but today it’s wide open for us,” said General Electric chief executive Jeff Immelt.

“Up to tens of thousands of American jobs are supported every time we expand trade with Africa”, said Mr Obama.

“As critical as all these investments are, the key to unlocking the next era of African growth is not going to be here in the US, it is going to be in Africa, ” he added. [myad]