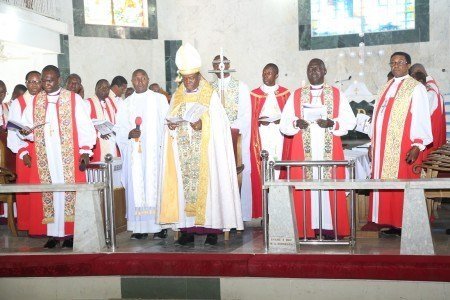 The Arochukwu/Ohafia Diocese of the Church of Nigeria (Anglican Communion) in Abia State has dismissed two priests for allegedly indulging in homosexuality.

A letter entitled: “Notice of dismissal from ministry”, dated April 29, 2019, and signed by Bishop of the Diocese, The Rt. Rev. Johnson Onuoha, circulated to all archbishops and bishops of the church said that an investigation by the diocese, after it got wind of the allegation, confirmed that the two men were neck-deep in the act.

The memorandum which was also copied to the Metropolitan and Primate of All Nigeria and Bishop of Abuja, The Most Rev. Nicholas Okoh, warned any persons dealing with the expelled clerics to be mindful as such could dent the image of the church.

The letter read in part: “We wish to inform you that the following clergy have been dismissed from the diocese of Arochukwu/Ohafia. They are Rev. Chukwuemeka Duru and Rev. Solomon Chukwuzubelu Okonkwo.

“The report got to us that they were indulged in the act of homosexuality. We investigated and found them guilty of such accusation. We were left with no option than to withdraw their letters of order (licences and certificates of ordination) and dismissed them from the ministry.

“Therefore, anyone dealing with these persons should tread with care as such can drag the image of the church to the mud.”

A staff of the Cathedral of All Saints Ugwuavo, Arochukwu confirmed the incident, saying: “Yes, we heard such thing, investigated and confirmed it. So, we showed them the way out. It’s not actually supposed to come from me, but the bishop. What you heard is true; there’s something like that.”