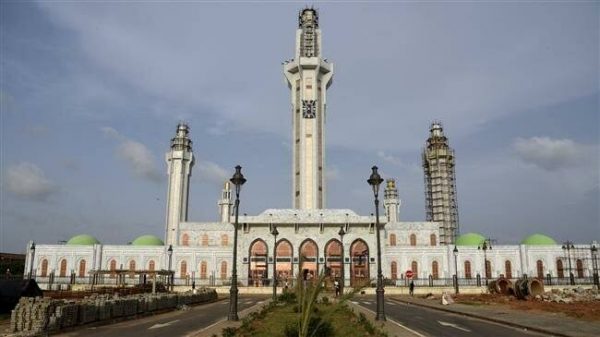 A 30,000-capacity mosque, touted as the largest in West Africa, has been opened in Dakar, capital of Senegal. It is built at the cost of $33 million, by Mouride Brotherhood.

With a Carrara marble exterior and boasting five minarets – the tallest 78 metres (255 feet) high – the mosque has a capacity of 15,000 worshippers inside, and another 15,000 on an outside esplanade.

The lavish interiors include a gold-leaf dome, giant chandeliers and decorations hand drawn by Moroccan workmen.

Work on the Massalikul Jinaan (‘The Paths to Paradise’) mosque was said to have began a decade ago on a swampy six-hectare (14-acre) site in the poor area of Bopp, on land donated by the government of the 90-percent Muslim nation.

The mosque is smaller than Casablanca’s Hassan II, which is spread over nine hectares and can accommodate 105,000 worshippers and has a minaret spiraling 210 meters.

Another mosque being built in Algiers is sprawled over nine hectares with a 265-metre minaret. It will be able to accommodate 120,000 people.