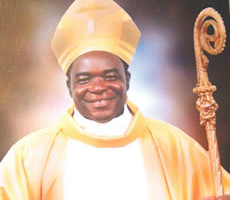 The bishop of Sokoto catholic diocese, Rev Father Mathew Hassan Kukah is not a person who needs a second mention. The reverend father has been involved in political and religious circles in Nigeria, particularly in the Northern part for a very long time. The man Rev Kukah is a very popular and influential clergy in Northern Nigeria. Since his appointment as the archdiocese of Sokoto, Rev Kukah has indeed integrated with the political and traditional institutions within the state. Indeed Rev Mathew Kukah has blended effectively even with part of the grassroots community within the state.
Sokoto state is predominantly Muslims and is rightly termed ‘the seat of the caliphate. As a matter of fact, Sokoto has been the epicentre of the jihad waged by the respected revered reformer sheikh Uthman bin Fodio in 1804 which led to the establishment of the great Sokoto caliphate.
First, It must be stated that Rev Kukah’s religious sojourn in Sokoto is by no means against any law in the country, in fact it is within his unalienable rights as provided in Nigeria’s constitution to preach the gospel in any part of the country. Nigeria is a secular state and there is no state religion as contained in Chapter 1 part 2 section 10 of the 1999 constitution (as altered) hence all citizens have the right to practice their religion anywhere within the nation’s borders.
Rev Kukah is from Kaduna state which has taken the gold medal in religious intolerance in Nigeria. The respected Rev Fr Kukah was a very influential catholic bishop in kaduna state during the gradual metamorphosis of the state into the hub of religious intolerance and orgy of violence which was symbolised by several decades of senseless and needless killings between Muslims and Christians. This is worrisome.
Secondly, what caught the eye the most and raised concerns about Rev Kukah’s presumed religious outreach in Sokoto was his rather mendacious offer to train 10 million Almajiri children in Northern Nigeria in skills acquisition centres the Kukah centre intends to build.
Rev Kukah’s motive for making this conscripted offer is suspicious moreso when juxtaposed with the much talked-about ‘Christianisation agenda. The case of the several children ‘stolen’ from Kano, taken to Onitsha, got their names changed and forcefully converted to Christianity is still fresh in memory.
The Trojan horse a.k.a skills acquisition centres to train  Almajiri Muslim children is no less a modest colonialism. Why didn’t Rev Kukah direct such offer to the Christian children in Zangon Kataf, Kaura, Jaba and other Christian communities in his native kaduna state also ravaged by debilitating poverty?
Rev Kukah’s offer is but another attempt to reinvent Christian missions in Northern Nigeria.
During the colonial era, Christian missionaries took advantage of the scourge of the leprosy disease ravaging some Northern Muslim communities. These missionaries offered a cure to the vulnerable leprosy infested Muslim communities only to convert them to Christianity. The rest is history.
Now Rev Kukah seems to be doing a copy cat but this time using poverty not leprosy.
Rev Kukah’s so-called Almajiri training programme and skills acquisition centres are actually missionary centres for possible forceful conversion of Muslim Almajiri children to Christianity. In these centres, one can expect an Almajiri Muslim child trying their hands on furniture design with a bible on their side on the way to possible conscription.
The social media was awash recently with videos of Muslim women in Northern Muslim rural areas being converted to Christianity and given gifts of the bible by a Christian clergy. These conversions though not against the Nigerian laws, are recipes for inter-religious conflict and political destabilisation like the recurring conflict in some states such as Kaduna and Plateau.
Perhaps people plotting to take advantage of the twin scourges of Almajiri and poverty to convert innocent Muslim children to Christianity need to be informed of Surat Al-Hijrah 15:9 where Allah (SWT) said he will guard his religion and his true servants.
‘Indeed, it is WE who sent down the Quran and indeed, WE will be its guardian: (Al-Hijra 15:9).
It is not enough to condemn the suspicious offer of Rev Kukah to empower Muslim Almajiri children. Northern states governors and other political leaders need to move from lamentations to tackling the debilitating and outrageous levels of poverty head-on. The Ulamas and other political leaders in Northern Nigeria must join hands to avert a Christianisation agenda and political destabilisation in the guise of Almajiri training/empowerment programme. It is a danger that anyone can see ahead.
The Northern state governors should pool resources to build skills acquisition centres that will train both Muslim and Christian children.
Figures from the national bureau of statistics have placed Sokoto state at 81.2% poverty rate. This is utterly unacceptable.
Despite its huge economic potentials, Sokoto is rightly referred to as a ‘civil service state’ because the economy of the state revolved entirely around civil servant’s salaries. When one spots a crowd around automated transfer machines (ATM) in Sokoto state, be rest assured that  salary has been paid.
The state is endowed with enormous human and natural resources such as limestone for cement production (about 3/4 of the 23 local government areas in the state have limestone in abundance), fadama for rice irrigation, red goat skin, cotton production potentials etc. It has to be stated that industrialisation of the state is the way out of the current astronomical levels of poverty. The precursor to the Almajiri scourge is poverty. Almajiri and poverty are mutually inclusive.
Our Ulamas and leaders must step up effort to avert any ‘backward enchroachment into their values: not by words but by actions. A stitch in time saves generations.
Dr. Abubakar Alkali can be reached at alkalizai@yahoo.com..