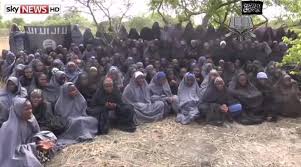 There are indications that members of the dreaded Boko Haram have converted the abducted female students of the Government Girls Secondary School Chibok in Borno state, most of who are Christians to Islam against their will.

A new video released today by Boko Haram showed the girls, about 130 0f them, dressed in Hijab and in the Islamic praying mode.

Leader of Boko Haram, Abubakar Shekau was heard saying in the video: “these girls, these girls you occupy yourselves with..we have indeed liberated them. These girls have become Muslims.”

The video shows the girls praying even as the group’s leader said that the abducted girls will be held until all imprisoned militants had been freed.

This is showing that after increased call from the international community, including the special initiative taken by American First lady, Michelle Obama to have the girls released, the situation still remains dicey.

Two girls are heard saying that they were previously Christians and have now converted to Islam, while the other says she is Muslim.

Majority of the abducted girls belonged to Christian communities, while some of them were Muslim.

There is still no indication as to where the girls are being held and where or when the video was taken, although the location appears to be a remote one.

The video shows only about 130 of the 276 pupils abducted from the school in the northern state of Borno, an indication that the girls could have been divided into smaller groups to avoid being detected.

The latest video was released after Governor Kashim Shettima of Nigeria’s Borno state had earlier stated that he had information on the whereabouts of the schoolgirls and that he had passed the reports of the sightings to the military for verification.

Boko Haram abducted the girls on 14 April and threatened to sell them soon after, in another video.