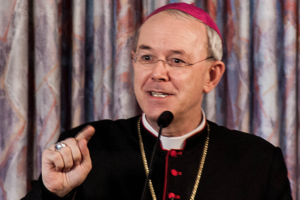 An auxiliary bishop of Astana, Kazakhstan, Catholic Bishop Athanasius Schneider has described what he called “schism” and the scandal and confusion it generates in the Church as having been giving rise to an “anti-gospel,”

The Bishop, who echoed concerns that some bishops apparently are misrepresenting Church teaching on marriage, divorce, and Communion, said a “certain type of schism already exists in the Church” over these issues, and it is a “bizarre form of schism” because the clergy who reportedly are promoting error are using their authority to smear other bishops who are teaching the truth.

Saying that the truth-tellers are being labeled schismatics, Bishop Schneider said that this “schism” and the scandal and confusion it generates is giving rise to an “anti-gospel,” a worldly gospel that looks divine on the outside but is false on the inside.

Bishop Schneider’s remarks were in reference to the handling of Pope Francis’ letter on the family, Amoris Laetitia (The Joy of Love). It apparently is unclear in the letter whether the Pope is saying some divorced and civilly remarried couples, under certain circumstances, may receive Communion at a Catholic Mass, even though they are living, objectively, in a state of adultery, a serious sin.

Some bishops have said yes, this is the case. However, at least four Catholic cardinals have publicly asked Pope Francis to answer this question clearly and simply — yes or no.

Pope Francis has not done so, and some Vatican officials have condemned the four cardinals for asking the Pope for clarification.

On the French internet TV show TV Liberte, as reported by EWTN, Bishop Schneider was asked if the silence, the unanswered questions, added to the risk of potential schism in the Catholic Church. Bishop Schneider, the auxiliary bishop of Astana, Kazakhstan, said, “It is not only a risk of schism but a certain type of schism already exists in the Church.”

“In Greek, schism means to separate oneself from the totality of the Body,” said Bishop Schneider. “Christ is the totality of the Body of Divine Truth, and unity in His supernatural body is also visible. But we are witnessing today a bizarre form of schism. Externally, numerous ecclesiastics safeguard formal unity with the pope, at times for the good of their own careers or out of a kind of papolatry. And at the same time they have broken ties with Christ, the Truth, and with Christ, the true Head of the Church.”

“On the other hand there are ecclesiastics who are denounced as schismatics despite the fact that they live in canonical peace with the Pope, and remain faithful to Christ, the Truth by assiduously promoting His Gospel of Truth.”

“It is evident that those who are internally the true schismatics, in relation to Christ,” he said, “make use of calumnies for the sole purpose of silencing the voice of truth by absurdly projecting their own state of internal schism on those ecclesiastics who, regardless of praise or rebuke, defend the divine truths.”

However, God’s truth cannot be misrepresented forever, said Bishop Schneider. “Even if a number of high ranking officials in the Church today temporarily obscure the truth of the doctrine of marriage and its perennial discipline, this doctrine and discipline will always remain unchangeable in the Church because the Church is not a human foundation, but a divine one,” he said.

As for the Pope’s letter, Amoris Laetitia, Bishop Schneider said his first concern is “the very concrete question of admitting so-called ‘remarried divorcés to Holy Communion. In fact, during the last two synods on the family [in 2014-15], and after the publication of Amoris Laetitia there was, and continues to be to this day, an arduous and tumultuous fight about this concrete question.”

“All of these ecclesiastics who want another gospel, meaning a right-to-divorce gospel, a gospel of sexual liberty — in short, a gospel  without God’s sixth commandment,” said the bishop.

“These ecclesiastics make use of all evil means, that is to say ruses, deceptions, masterful rhetoric and dialectics, and even the tactic of intimidation and moral violence,” he said,  “in order to attain the goal of admitting so-called ‘remarried’ divorcés to Holy Communion, without the latter fulfilling the condition of living in perfect continence, a condition required by divine law.”

“Once the objective is attained, even if limited to so-called exceptional cases of discernment, the door is opened to introducing the ‘Gospel of Divorce,’ the gospel without the sixth commandment,” said the bishop.

“And this will no longer be the Gospel of Jesus, but an anti-gospel, a gospel according to this world, even if such a gospel be cosmetically embellished with terms such as ‘mercy,’ ‘maternal solicitude’ or ‘accompaniment,'” he said.

If the confusion continues, then “the bishops have to indefectibly preach the unchanging Gospel concerning the divine doctrine of the morality and perennial discipline of marriage,” said Bishop Schneider.

He also stressed that “the entire Church must pray for the Pope, so that he finds the knowledge and the courage to fulfil his primary task. When St Peter, the first Pope, was imprisoned the entire Church prayed continually for him and God freed him from his chains.”

In a comment at the end of its report, EWTN noted: “Schism is a mortal sin against the faith of the Church which the Catechism of the Catholic Church describes as breaking the first of the Ten Commandments, ‘You shall worship the Lord your God and him only shall you serve.’

“As Bishop Schneider warns, an unspecified number of clergy are in a state of internal schism against the divine truth of Christ, and they are employing evil means to hide the reality of their schism including the tactic of intimidation and moral violence.

“To justify their schism, these ecclesiastics are also attempting to project the accusation of schism against clergy, such as the Four Cardinals, who are prudently and earnestly seeking to protect the faith. The personal insults and attacks directed at the cardinals who submitted the dubia [questions to the Pope] indicates the truth about who are the real schismatics, for schism is a sin against charity.”