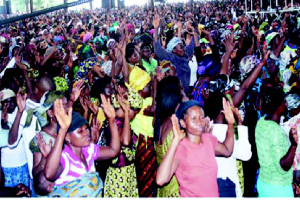 The Acting Chairman of the Economic and Financial Crimes Commission (EFCC), Ibrahim Magu, has asked churches in Nigeria to direct their messages more on the need for Nigerians to embrace integrity and hard work, rather than prosperity.

According to him, such messages are necessary to catalyze the citizens towards playing positive roles in national development.

Magu who spoke at St. Luke Anglican Church, Lalupon, Oyo State, where he addressed the congress of Christian Association of Nigeria (CAN), Oyo State Chapter, yesterday,  November 28, also called on Christian leaders to always preach love to their followers.

The EFCC boss, who was represented by the Head of the Ibadan Zonal Office of the Commission, Friday Ebelo, said that the country is at a critical stage of its development and that citizens need  to join hands to work for its progress.

He advised Nigerians to shun corruption and imbibe virtues that would help the nation reclaim its greatness.

This was as the Oyo State chairman of CAN, Pastor Benjamin Akanmu, commended EFCC’s leadership for involving the religious community in the anti-corruption war.

He observed that EFCC’s efforts in the war against corruption are yielding fruits, promising the continued support of the state’s chapter of CAN to the Commission’s activities.