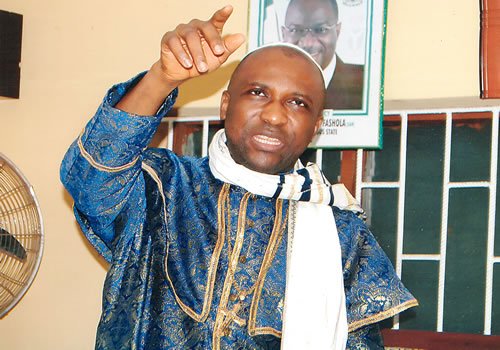 “God is going to condemn lot of pastors.

“Christians are the problems of Nigeria.

“They don’t have love. They have different doctrines, and some preaching are not even biblical.”

These are the words of an angry Primate Elijah Ayodele, Leader of INRI Evangelical Spiritual Church, over the silence of top church leaders on the death of Prophet TB Joshua.

Primate Ayodele  regretted that the love and unity in Christianity have been destroyed by top men of God with the spirit of envy and hatred, adding: “Christians are the problem of the church.

“Everyone will die one day, but it’s unfortunate that a Christian brother died and the so called big pastors can’t say a word of condolence.

“Is that how good leaders act? What they have done is wrong.

“What does it take CAN, PFN to come out when the death happened to pay condolences?

“The likes of Chris Okotie went ahead to call TB Joshua a wizard.

“Some called him devil while he was alive.

“Was it God that revealed to them that he is working for the devil?

“Why not bring an evidence?

“When the beloved son of Pastor Adeboye died, TB Joshua sent condolences and ordered a one minute moment of silence to honour the deceased, but now that he is dead, what have they done?

“These are part of hooliganism in Christianity.

“I’m highly disappointed in Pastor Adeboye who is seen as a prominent Christian leader for keeping silent on this.

“Every one of us will die someday.

“This is not the time for hatred.

“There is so much hatred in Christianity and that is why I will never join CAN, PFN or any Christian association.

“They are associations of envy and hatred.

“They claim that they went to bible school.

“Is that what the bible taught them?

“If at all TB Joshua offended anyone, why can’t they forgive him?

“They should all change.

“They are getting older.

“CAN, PFN are just associations for the government and for personal gains.

“These associations are not biblical.

“I have no apology.

“I am saying this the way I feel.

“The administrators of these associations are selfish, greedy and totally self-centered.

“We need to support one another.

“Let the bigger pastors help the lesser ones to grow.

“That’s what we need in Christianity.

“Not all these associations causing division.”