Home FAITH Help, Our Children Are Dropping Out Of Schools, Governor Uduaghan Cries Out... 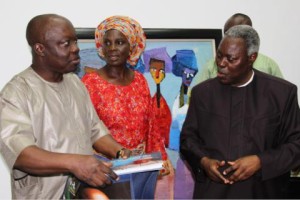 Governo Emmanuel Uduaghan of Delta State has called on religious leaders to intervene in the high rate of students that are dropping out of schools, even as he sought their assistance in asking parents to take parental upbringing seriously.
The Governor made the call today in Asaba when he played host to the General Superintendent of Deeper Life Bible Church Worldwide, Pastor William Kumuyi. Wife of the Governor, Deaconess Roli Uduaghan and other top government functionaries were present at the occasion.
Governor Uduaghan emphasized his unhappiness with the rate of out- of- school children in the country, saying that it is a challenge for religious leaders to convince parents to ensure that their children have a proper upbringing. According to him, the rate of criminality among young children could be linked to lack of parental care.
“We hear that about 40 per cent of children that are supposed to be in schools in the country are not in schools and for us in Delta State, it is about 10 per cent and we are also very worried that we still have people who are not in school. So we set up the ‘EduMarshal’ to ensure that every child that is of school age gets back to school.
“We have discovered vices among children which are attributable to lack of parental care; I want to beg you as a Spiritual Leader to admonish parents to be more responsible to their duties as criminality starts from the child’s upbringing.”
Dr. Uduaghan reiterated that his administration is would ensure that no child of school age is out of school, adding that primary and secondary education are free in the state while over 280 Deltans who are first class graduates have benefited from his administration’s scholarship programme for first class graduates.
While calling on Pastor Kumuyi to pray for the state and Nigeria as a nation, Governor Uduaghan attributed the achievements of his administration in the past seven years to the handiwork of God, asserting.
“The finger of God is working in Delta State,” he asserted.
Earlier, Pastor Kumuyi said that he was on a pastoral visit to the state even as he lauded Governor Uduaghan’s developmental stride.
“when I was entering Delta State, everything has virtually changed. Great things have been done in the stateM I want to commend the developmental stride of the Governor.
“I will not be surprised if the state becomes a model in the country. The Governor looks so simple and unassuming. He is a great gift to Delta State and the country.”
Pastor Kumuyi said that he is interested in youth’s development, especially on their spiritual and material greatness.
He stressed the need for the nation to invest more in the youths and to impact positively on their lives.

See also:  So, My Father, Imam Shuaib Agaka, Is No More? By Yushau A. Shuaib