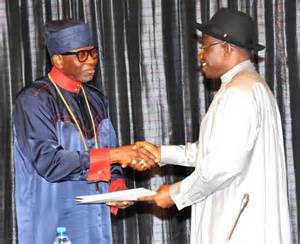 “The only thing I noticed is that various state governments are trying to withdraw from sponsorship of pilgrimage maybe because of the economic pressure on them. But we will encourage them to do so.

“So if sub-national governments relax a little, the gap will be filled up.”

He expressed delight that the exercise was hitch-free despite the huge number of people involved.

He promised that his administration would study the report and implement the various recommendations made.

The President thereafter dissolved the 10-man delegation with a promise to constitute that of 2015 very soon.

Oritsejafor, who is the President of the Christian Association of Nigeria, had earlier told the President that all Christian pilgrims from all the states in the North were sponsored by individuals or were self-sponsored.

He said with the total of 12,890 pilgrims that performed the exercise, the Nigeria Christian Pilgrims Commission recorded about 45 percent increase in self-sponsorship.

As part of the delegation’s report, Oritsejafor called for the adequate funding of Nigerian embassies in Rome, Greece and Tel Aviv to assist in the handling of pilgrims.

He also called on various governments both at the states and local levels to sponsor Christians for pilgrimage especially as the commission is using the pilgrimage as a tool for moral and spiritual transformation. [myad]