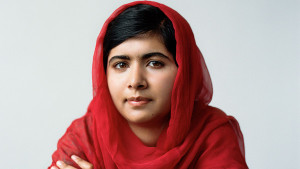 A teenage Pakistani activist, Malala Yousafzai has called on Boko Haram terrorists to stop misusing the name of Islam which is not against young girls going to school to acquire knowledge.

In a message she delivered in Abuja to mark Malala Day, a day to advocate for the education of every child in the world, Malala said that indiscriminate killing of innocent people,including Muslims can never be in line with Islam or any known religion, even as she appealed to the terrorists to release the Nigerian school girls abducted since April 14.

“I ask Boko Haram to stop misusing the name of Islam; Islam is a religion of peace; Islam allows every girl and every boy to get education, to go to school and education is compulsory in Islam. The word ‘Islam’ means peace, and the first word that was revealed to Prophet Muhammed (Peace be upon him) was Iqra (read). Islam gives the message of tolerance, patience, harmony and humanity.’’

Malala advised Boko Haram members to lay down their weapons, release the abducted girls and respect the language and culture of other people.

“I ask Boko Haram to think about their own sisters; if they suffer in the same brutal and harsh situation how would you feel? If your sisters are homeless, if they are under the captivity of someone who is so violent and cruel how would you feel?

“Those who are under your imprisonment are like your  sisters; Islam preaches a message of brotherhood; we are all sisters and brothers. Release the daughters of this nation; let them be free; they have committed know no crime. ’’

The 17-year-old Pakistani girl dedicated the 2nd Malala Day to her “Nigerian sisters” kidnapped by Boko Haram, whom she said have become victims of terrorists like her, after she survived a Taliban gun shot to her head.

She recalled that the maiden edition of Malala Day was celebrated in 2013 at the UN headquarters in New York and she used the occasion to demand world leaders to ensure free and compulsory education for every child.

Malala said she had been inspired by story of one of the Chibok girls whom she called “my sister” and they met on Sunday in Abuja.

“My Sister comes from the Nigerian village of Chibok. She is 16 years old and one day, when my sister was in school, some armed terrorists known as Boko Haram came and tried to steal her dreams.

“They kidnapped her but she was one of those luckiest ones who escaped from the abduction; before that, her father got killed and her mother and sister got injured in the unstable situation in the North of Nigeria.

Because of insecurity and poverty, she can no longer go to school and her favourite subject is Biology and she wants to become a doctor.

“Every Day, Boko Haram terrorises the local people and over 200 girls were kidnapped and still have not returned; next week, it will be 100 days.

“Hundred days since they were taken; 100 days in captivity; 100 days out of school without parents and 100 days under fear.’’

The education advocate noted that the situation of insecurity was not peculiar to Nigeria, noting that similar conditions exist in the Middle East, Pakistan and African countries.

She said the insecurity in different parts of the globe such as Syria, Gaza, Ukraine and Afghanistan had forced many school age children out of school.

According to her, in her native country, Pakistan, seven million children are deprived of basic education.

“In Pakistan children have to leave their homes for their safety because there is a military operation going on against the terrorists and many children do not have access to education and they are out of school.’’

She accused world leaders of keeping silent on the plight of children in Syria, Gaza and Palestine.

Malala said on her 17th birthday, her wish was for the world to listen to the voice of the escaped Chibok school girls and their parents.

She announced the Malala Fund donation of 200,000 dollars to two Nigerian organisations working on education of the girl-child.

Malala also said she had earlier met with President Goodluck Jonathan who assured her that  the government would use the best option to secure the release of the girls alive.

According to her, Jonathan also promised to meet the parents of the abducted school girls.

She asked Nigerians to be united and not to “judge each other on the basis of religion, colour, creed or the languages that you speak.” [myad]