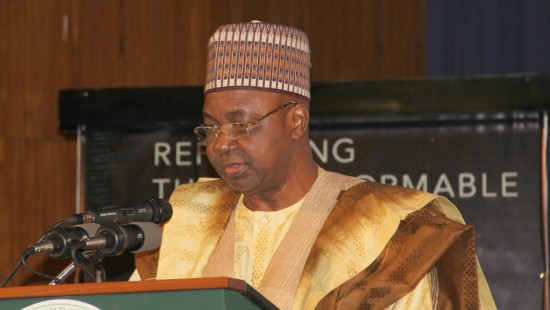 Vice President Mohammed Namadi Sambo has charged the new Board of the National Hajj Commission of Nigeria (NAHCON) to surpass previous standards on hajj operations, assuring members of the board that they were chosen based on their wealth of experience and diligence.
Namadi Sambo who performed the inaugurat5ion of the board today at the Presidential Villa, Abuja said that their duty is not only bound by the governing rules of the Board but also that of Almighty Allah.
“I charge the new members to be steadfast in their responsibilities by not only meeting the high expectations of the Muslim Ummah on Hajj Operations, but by surpassing such expectations by discharging their duties diligently and to the best of their ability and conscience.”
Vice President Sambo commended NAHCON for delivering on its mandate in improving the standards of Hajj operation in the country since its inception in 2007, which he acknowledged has facilitated smoother hajj experience for the average Nigerian pilgrim.
“Our pilgrims now enjoy better accommodation and better facilities during Hajj operations. The management of the Hajj operations has been greatly enhanced to face contemporary challenges and to accommodate the increasing number of intending pilgrims that apply annually for this spiritual obligation.”
Vice President Sambo congratulated the erstwhile board members for successfully completing their tenure and for the various developments they brought to the commission.
Speaking on behalf of the Board members, the Chairman, Abdullahi Mukhtar Mohammed thanked President Jonathan and Vice President Sambo for given them the opportunity to serve their country and pledged their commitment to live up to expectation of all the stakeholders particularly the pilgrims.
NAHCON was established in 2007 and its board is consisted of nine members including the Chairman. The tenure of the board is four years. Since its establishment the board had been inaugurated twice on May 25th of 2007 and 2011, while for 2015 it was done today.
Members that were inaugurated were Abdullahi Mukhtar Mohammed, who is the  chairman, Yusuf Adebayo Ibrahim, Abdullahi Modibbo Saleh, Alhaji Ibrahim Ezeani, and Adeyemi Ademola Fuad as well as  Alhaji Enenwary Zikey, Hajiya Aisha Maidubu Mohammed and Danjuma Salihu Usman. The ninth member, Hajiya Ramatu Bala Usman, is still awaiting National Assembly confirmation.
[myad]