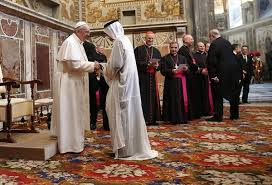 Pope Francis is scheduled to begin a three-day visit to the Middle East on Friday, covering Jordan, the Palestinian Territories and Israel.

Vatican spokesman in Jerusalem, Father David Neuhaus, said that the Pope would be accompanied by his personal friends – a Rabbi and a Muslim leader from Buenos Aires.

He said the Pope would arrive in Jordan on Saturday, where he would celebrate mass in a stadium and visit the site where Jesus is believed to have been baptised.

On Sunday, he would move to Bethlehem, where he is due to meet with Palestinian President Mahmoud Abbas.

Neuhaus said during the visit, Pope Francis would celebrate the 50th anniversary of a meeting that assuaged historic divisions with the Orthodox Church.

“The meeting 50 years ago put “aside centuries of mutual contempt within the church, and Pope Francis is coming to renew that initiative,” he said.

Neuhaus said on Sunday, Francis was due to embrace the current Patriarch of Constantinople, Bartholomew, in the same room where their predecessors met, and pray with him in the Church of the Holy Sepulcher.

“This is the site where Jesus is believed to have been crucified,’’ he said.
He said Francis would also deliver words of encouragement to Christian minorities in the Middle East.

Neuhaus said he would use his moral authority to call for reconciliation between Israelis and Palestinians and support inter-faith dialogue.
He said later in the day, he would arrive in Jerusalem for the ecumenical meeting with Bartholomew.

The spokesman said that Pope Francis would on Monday, meet with Israel Prime Minister, Benjamin Netanyahu and President Shimon Peres, and also visit the Wailing Wall and the Yad Vashem Holocaust Memorial Centre.

He said Pope would not celebrate a public Mass in Israel, but in a first for a visiting pontiff, lay flowers at the tomb of Zionist movement founder Theodor Herzl.

Francis was the fourth pope to visit the Holy Land after John Paul II in 2000 and Benedict XVI in 2009.