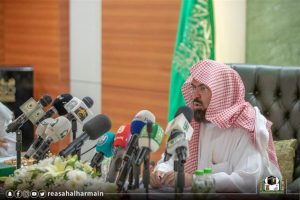 The management of the two Holy Mosques in Makkah and Madinah, Saudi Arabia, headed by Sheikh Dr. Abdurrahman bin Abdulaziz Al-Sudais as President, has announced some welfare package for Muslims in and outside the country going for Umra during the month of Ramadan, which may begin on Monday, May 6 across the Muslim world.

At a meeting with the Council members today, Wednesday, in Al-Haram, Makkah, Sheikh Al-Sudais confirmed that the operational plan will focus on development, renewal, and the coverage of welfare services to be carried out by thousands of permanent and adhoc staff.

According to the plans, the General Presidency will provide 10,225 wheelchairs and 1,500 electric wheelchairs beside providing 110,000 Iftar Saem meals daily at the piazza of the Haram.

He said that about 210 doors will be made ready for service in the Haram, even as about 25,000 containers of  zamzam will be provided as well as about 34,591  new carpets for prayer.

See also:  Many Things I Was Teaching Did Not Make Sense To Me - Pastor Who Converts To Islam

“About 1,500 permits have been given for Iftar Saen’m meals inside the Haram. There are more than one side to the plan, which include engineering, cultural, information, social workforce and development observation.

He said that the packaged plan will be implemented through 14 departments  that are expected to guide and direct religious knowledge and affairs, information technology, field supervision, safety and security, crowd control, social services, King Abdulaziz Center for Kiswa, public relations and women services.

It added that there would be about 1,200 employees, made up of official employees and temporary employees who will work for the attainment of the plan, including cleaning and maintenance.

The Presidency said that the two Holy Mosques are expected to witness increase in the number of visitors during the month of Ramadan.