Home OPINION COMMENTARY Are All Religions The Same? By Nathan Uzorman 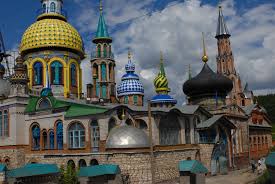 The Bishop of Hereford was once being patronised by a great lord who talked very proudly. “I never go to church,” boasted the lord.

“Perhaps you have noticed that, Bishop?”

“Yes, I have noticed it,” answered the Bishop gravely.

“Well, the reason I don’t go is that there are so many hypocrites there.”

“Oh, don’t let that keep you away,” said the Bishop smiling.

“There is always room for one more, you know.”

This is the true position of life. Many people have stopped going to church because of many abominable things going on in various churches. This is core religiosity and not spirituality.

The spirituality of the ancient is today seen as a taboo and is replaced by “me I no go suffer, I no go beg for bread, God of miracle na my papa“. What an error!

The ancient voiced the spirit of unity and agreement; that is why we may accuse them of (plagiarism) copying from one another. They have been the founders of divine reality. If man can forsake imitations and investigate the reality underlying the revealed word of God, they will be reconciled, for reality is one in diversity. This, however, is not to be doubted because there is unity even in golden rule among all religions of the world. The teaching according to which we should treat others as we ourselves would wish to be treated, is an ethic variously repeated in all great religions:

In Buddhism: “Hurt not others in ways that you yourself would find hurtful” Udana- varqa, 5:18. In Ziriastruabusn: “That nature only is good for when it shall not do unto another whatever is not good for its own self”- Dadis-tan-I dinik, 94:4. In Judaism: “What is hateful to you, do not to your fellow man. That is the entire law, all the rest is commentary.”- The Talmud, Shahbat 310. In Hinduism: “This is the sum of all righteousness: deal with others as thou wouldst thy self be dealt by. Do nothing to thy neighbor which thou wouldst not him do to thee after.”- The Mahabharata.

In Christianity, the same voice is heard thus: “As ye would that men should do to you, do ye also to them likewise.” -Jesus Christ, Luke 6:31. In Islam: “No one is believer until he desires for his brother that which he desire for himself.”-Sunnah. In Taoism: “The good ought to pity the malignant tendencies of others, to rejoice over their excellence to help them in their straits to regard their gains as if they were his own, and their losses in the same way.”-The Thai-Shang, 3. According to Confucianism: “Surely it is the maxim of loving-kindness: do not unto others that you would not have them do unto you.”-Analects, xv, 23. In the tablet of Baha-u-llah, 71 (bahai) it says: “Blessed is he who preferreth his brother before himself.”

Every religion is one. Religion is the outer expression of divine reality. Therefore, it must be living, vitalized, moving and progressive. If it be without motion and non-progressive it is without the divine life; it is dead. The divine institutes are continuously active and evolutionary; therefore, the revelation of them must be progressive and continuous. All things are subject to reformation. Old ideas and modes of thought are fast becoming obsolete. Ancient laws and archaic ethical systems will not meet the age of the revelation of reality and therefore the greatest of all centuries.

All the world over, mankind has honoured the spokesmen of God and has adopted their teachings. It reveres Christ, Muhammad, Buddha, Zoroaster, Krishna, and other high prophets as its greatest leaders. But it has not looked at them as related to one another. It has thought of them as rivals, competing for the homage of the world. Man has imagined that to accept the revelation of one is to deny the revelation of every other and that the followers of any one high-prophet are not loyal to their lord unless they esteem Him the sole authentic revealer come from God. This imagination of man has sought to balance the high- prophet-against one another as it were in scales, so that when one goes up, the other must go down. Thus, the influence of religion which ought to unify the earthmen, has, through a deep misunderstanding, engendered hostility and strife.

The prophets never spoke evil or ill of one another; the antagonism originated from their followers. None of the prophets affirmed that his revelation was final or exhaustive. In former ages the manifestations of prophets and masters did not explain clearly their station. Sometimes they spoke as though they were God himself, at other times they would admit that they themselves were human. Their immediate companions, perhaps, understood the hidden references to their true state, but later followers were confused. These either worshipped them as God or regarded them only as inspired men. Doctrines such as the Trinity were evolved to try to explain the seeming contradiction of their station.

We, in this glorious age, are more fortunate because Christ is here in the person of the Holy Spirit to teach us all things. A casual look at the great religions of the world is enough, if unprejudiced, to reveal that they have much in common. All teach love, justice, detachment from personal desire, honesty, selflessness, mercy, truthfulness, moderation, and trustworthiness. These truths are not just words. When society forgets them, the resulting pain is sharp and deep.

Baha’ is believe that religion should unite all hearts and cause wars and disputes to vanish from the face of the earth, give birth to spirituality, and bring life and light to each heart. Mankind will have achieved the great peace, for which from age the sacred scriptures have constantly held the promise, as we shall soon see. The Bible says: “Depart from evil, and do good, seek peace and pursue it”- Ps. 34:14. According to Lao Tse: “Weapons, however ornamental, are not a source of happiness, but are dreaded by all. Therefore, the man of Tao will not abide where such things are.” For Buddha: “Among such humans, brethren, at Ketumati the royal city, there will arise Sankha, a wheel-turning king, righteous and ruling in righteousness.

“He will live in supremacy over this earth to ocean bounds, having conquered it not by the scourge, not by the sword, but by righteousness.”