Home FAITH Success Of My Government: There Is God O – Governor Uduaghan 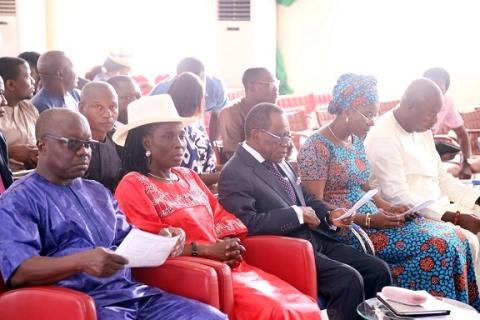 Delta State Governor, Dr. Emmanuel Uduaghan has said that there is hand of God in the success his government achieved with particular reference to peace that the people in the state have enjoyed.
Uduaghan said today in Asaba at a special thanksgiving service of the Government House Family  to celebrate God’s Goodness on his administration for the past eight years at the Government House Chapel, that prayers for God’s control in the affairs of the state have been the secret.
The governor gave all glory to God for the great stride the state had made in all facet of human endeavours, even as he thanked all the clergymen and prayer warriors for being steadfast in prayer for the state.
He commended the Government House family too for supporting his administration with prayer in the last eight years.
The governor also remembered the prayers offered by members of the Alter of New Beginning, and added: “the incoming administration will continue on this path of prayers for peace in the state.”
Governor Uduaghan said that he is leaving a legacy of peace for the state and hoped that the in-coming administration would try to sustain this peace with prayers.
According to him, direct investments have increased in the state as a result of the peace in the state, adding: “I pray that the peace God has granted the state will continue to be sustained.

“Foreign Direct Investment can only come into the state when there is peace and security. I thank God today that the era of war, kidnapping and robbery is over in the state as it had  massive effects on investments.”
Dr. Uduaghan emphasized that for peace to continue, people must pray and supplicate on behalf of the state.
The chaplain of the chapel, Rev. Ben Golley expressed gratitude to God for his goodness and kindness, adding that governor Uduaghan, his family  and members of his administration have every reason to thank God for his goodness  to them in the last eight years.
He said that the  governor’s developmental strides and achievements could be attributed to God’s power and goodness in his life. [myad]