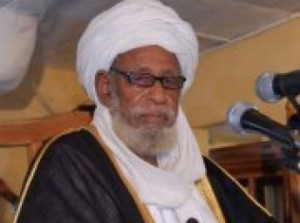 A prominent Islamic scholar and leader of Darikah sect, Sheikh Dahiru Bauchi, escaped death today when a suicide bomber, suspected to be Boko Haram member targeted him but missed him by hire’s breathe.

Sheikh Dahiru Bauchi was said to be coming from the venue where he formally ended his annual Ramadan prayers. Thousands of Islamic faithful were said to have gathered for prayers with Sheikh Dahiru at Murtala Muhammed square, and when his convoy pulled up, the bomber lunged at him before being stopped by his private security.

Kaduna state Police Commissioner, Shehu Umar confirmed that “the attack was targeted at the sheikh,” saying that no arrest has been made yet.

The bomb did not injure the cleric even as volunteer who evacuated bodies, said there were 32 confirmed dead so far.

Shortly after, a second bomb blast killed 50 people in the crowded Kawo market claiming the lives of about 40 people, bringing the total of those who lost their lives in the two blasts to about 72.
However, Kaduna State Police Commissioner confirmed that about 25 people died in the two separate blasts. [myad]