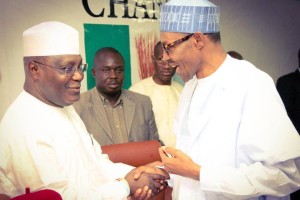 Twelve presidential candidates in the February 23 election have advised the defeated Presidential candidate of the Peoples Democratic Party (PDP), Atiku Abubakar to put Nigeria above primordial sentiment at this crucial time by respecting the verdict of the citizens.

The Presidential candidates, in a statement today, Monday congratulating President Muhammadu Buhari, the candidate of the ruling All Progressives Congress (APC), for his electoral victory.

The group, acting under the aegis of Forum of Presidential Candidates and Political Parties for Good Governance, said at a news conference in Abuja, that the victory for Buhari was deserved.

“We are indeed not oblivious of the fact that only one candidate will emerge as president. Now that the candidate of the APC, President Buhari has been re-elected, we have no qualms accepting his victory.

”Permit this opportunity to congratulate President Buhari on his well-deserved victory at the polls,” the group’s chairman, Shittu Kabir, said.

The Forum noted that the pattern of voting, the large turn-out and country-wide endorsement of Buhari attested to the fact that Nigerians are pleased with him, his style of leadership and performance in the last three and half years.

Shittu Kabir, who is a member of Advanced Peoples Democratic Alliance (APDA), called on Atiku and the PDP not to contest Buhari’s victory in court.

”We urge the candidate of the Peoples Democratic Party, Alhaji Atiku Abubakar, to disregard the advice of those asking him to challenge the outcome of the election in court.

”To borrow the popular adage in Africa, two litigants cannot resolve their differences in court and return to the same house as brothers. President Buhari and Alhaji Abubakar are brothers.

”We strongly urge Alhaji Abubakar to drop the legal option in expressing his grievances. This is consistent with the counsel of many well-meaning Nigerians, including Chief Olisa Agbakoba and General Ibrahim Babangida.

”We also believe that the former Vice President has made a mark among Nigerians of means who have positively impacted their communities.

”We think he has a lot more to contribute to developing humanity and promoting peace and progress in our nation, even without holding any political office.

”At his age, he should now avoid any action and utterances capable of fanning the embers of discord, disagreement and violent conduct. Nigeria is greater than any personal or class interest.” The Forum’s chairman called on Buhari to include everyone in his government, including those who did not vote for him.

He said with the right investment environment, the government had put measures in place to attract investment into Nigeria in the next three years.

He pledged the group’s “continuous support and cooperation to the government and look forward to collaborating in areas of mutual interest in the task of the nation-building’’.

He charged the commission to improve on its operational logistics in Saturday’s elections and ensure that all Nigerians would be able to exercise their mandate without hindrance.

The twelve presidential candidates of other political parties had before the poll, endorsed Buhari, according to a statement by presidential spokesman, Femi Adesina.

They said they decided to support Buhari because of advances made in security, economy, fighting corruption, infrastructure development and agricultural revolution.