Home NEWS POLITICS 2023 Presidency: Atiku May Dump PDP As The Party Zoned Him Out 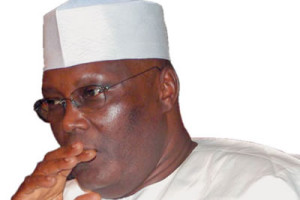 From the body language of the former Vice President of Nigeria, Atiku Abubakar, he is likely to leave the Peoples Democratic Party (PDP) before the 2023 elections to pursue his Presidential ambition.
Atiku, whose immediate reaction to the zoning of chairmanship of the part to the North was that zoning would not stop him from pursuing his ambition, was the party’s candidate that contested the 2019 presidential election with President Muhammadu Buhari.
Atiku was quick to make it clear that zoning is not the problem of the country.
By zoning the chairmanship of the part to the North, it is clear that, though the party is silent on it, the Presidency will go to the South thereby foreclosing Atiku’s ambition.
It is obvious that Governors from the South, led by Nyeson Wike of Rivers State, are trying to make sure Presidential slot goes to the South. Wine in particular appears to be dictating the direction the part is going.
The National Executive Committee of the party, at its meeting yesterday, October 7, had approved the zoning of the position of the national chairman to the North.
The zoning committee of the party under the chairmanship of Governor Ifeanyi Ugwuanyi of Enugu State had made the recommendation public last week.
However, he had said that there was no decision taken on where the presidency will be zoned to.
This had generated heated controversy within the party as some stakeholders kicked against zoning of chairmanship.
Top shots of the party, including governors, presidential aspirants and others have been lobbying for the council’s decision on zoning to favour them.
A sharp crack was created after the zoning of the chairmanship to the North. It was gathered that PDP governors from the South led by Rivers State Governor Nyesom Wike and Seyi Makinde of Oyo State pushed for the zoning of the chairmanship to North.
The move is aimed at paving the way for the emergence of a southern candidate as the party’s presidential candidate.
The southern governors are demanding that the next president of the country must come from their region.
Briefing newsmen at the end of Thursday’s NEC meeting, National Publicity Secretary of the party, Kola Ologbondiyan, confirmed that NEC had ratified the zoning of chairmanship to the north.
He said that all positions in the party currently occupied by people from the South will go to the North and vice versa.
Ologbondiyan said that NEC also agreed that the October 30 convention date was intact.

See also:  2023: I Want To Be President Of Nigeria, 38 Year Old Woman Declares In Lagos