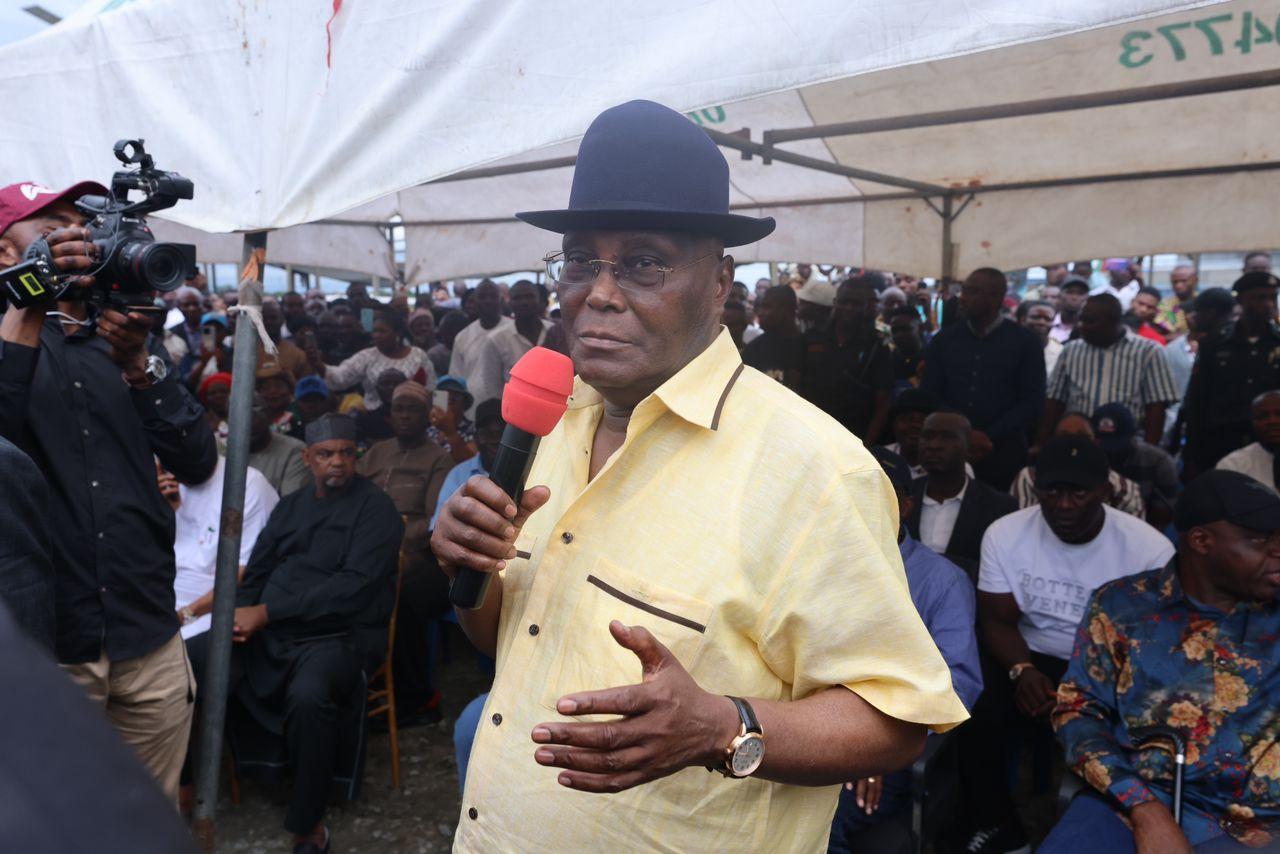 Presidential candidate of the Peoples Democratic Party (PDP), Alhaji Atiku Abubakar has donated the sum of N50 million to the victims of flood disaster in Bayelsa State.

This was even as he called on the federal government to launch what he called “an independent Flood Disaster Relief Fund” that will provide succour to the victims of the floods.
Atiku spoke today, October 25, when he paid personal a visit to Yenagoa, the capital of Bayelsa State, to sympathize with the state government and victims of the flood disaster across the state.

The opposition Presidential candidate also advocated for charity towards assisting the victims, explained that such relief fund should come in the form of a national emergency relief fund, similar in scope to what was initiated during the COVID-19 pandemic.

He appealed his personal friends and associates in the corporate world and in private capacities “to join in this cause.
“I also wish to call on governments at all levels to immediately activate measures to forestall the food shortages and further increment in the already high cost of food that are bound to arise from the loss of hundreds of thousands of hectares of farmlands.

“There is no doubt that a large number of the victims are farmers. I also wish to make a plea for the establishment of a temporary fund for farmers to ameliorate their losses and give them capital for next year’s planting season.
“Part of the plans to lessen the burden on Nigerians is for the federal government to consider increased releases of grains from our Strategic Food Reserves and reviewing our import policies to allow for the interim importation of food to make up for shortfalls in food production.”
Atiku said that to forestall the recurrences of such devastating levels of flooding, the government must build the critical infrastructure required to contain excess water along the banks of the Rivers Niger and Benue.
he noted that the change in climate is a pointer to every human community to be circumspect in leadership recruitments, adding that  Climate change is a convergence between politics and nature. Atiku argued that leadership and policies must also change to deal with the dramatic changes we are witnessing around us.
“If we get our politics wrong by electing leaders who choose to play politics with climate change, and refuse to make necessary investments in smart solutions, we will be living in the relics of times past, unmindful of our attendant vulnerabilities.
“It is worrisome that the current APC administration has failed to show leadership and empathy in the management of the disaster.
“Climate change is real and its effects are both local and global.
“If elected as President in the presidential elections next year, I shall commit to completing the Dasin-Hausa Dam in Adamawa State to manage the release of excess water from the Lagdo Dam in Cameroon.
“I shall also commit to working with state governments like Bayelsa to build the required flood management infrastructure such as levees and dykes in key locations in the Niger and Benue Basins.
“The dredging of the rivers and estuaries through which inland waters empties into the sea will help in stemming flooding in the Niger Delta areas.
“My government, if given the opportunity, will retool our disaster awareness apparatus, such as the Nigerian Meteorological Agency (NIMET) and the Nigerian Hydrological Services Agency (NHSA), to better forecast disasters and give the warning signals required to activate our national emergency response protocols.
“This retooling will also include the reform of the Nigerian Emergency Management Authority (NEMA) to ensure that it anticipates and responds to disasters such as this, more efficiently than it did, in the current situation.
“My government will ensure that we are never again this badly prepared or lacking in the infrastructure and response protocols to forestall devastation of this nature from natural disasters such as this.”