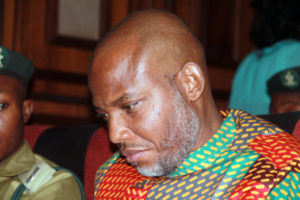 The Federal High Court sitting in Abuja, Nigeria’s federal capital, has revoked the bail granted the leader of the Indigenous People of Biafra (IPOB), Nnamdi Kanu and that he should be rearrested immediately.

A report by Channels Television said that Justice Binta Nyako gave the order in a ruling today, Thursday.

“She explained that the court gave the order because Mr Kanu had failed to appear in court after his bail was granted in April 2017,” the report said.

Nnamdi Kanu has since returned to his base in the United Kingdom after initial stay in Israel following his escape from Nigeria amidst military crackdown at his family home in Afaraukwu, Umuahia, Abia State.