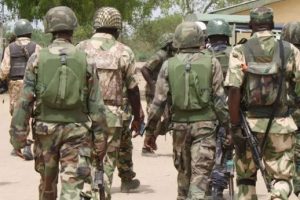 Information reaching us at Greenbarge Reporters online newspaper now said that a large number of gunmen, early this morning, August 24, stormed the Afaka barracks of the Nigerian Defence Academy (NDA), Kaduna, killing a naval officer.
The information had it that the invading gunmen also kidnapped two Majors in the army.
Sources within the barracks told our correspondent that security has been beefed up within and around the barracks to stop the gunmen from escaping with the officers.
“It was a terrible experience, the gunmen took advantage of the time when most people had gone to bed to attack the barracks,” a source said.
“Right now, the whole barracks is under lock and key and security has been beefed up so that the gunmen would not leave the barracks… it is believed that they are still within.”

One of the officers who was injured in the attack is currently being treated at a hospital within the barracks.

The source said there are, however, fears that the gunmen may decide to kill the officers in a bid to escape.

The Public Relations Officer of the Academy, Major Bashir Muhammed Jajira issued a statement this morning detailing how it all happened. Please read on:
The security architecture of the Nigerian Defence Academy was compromised early this morning by unknown gunmen who gained access into the residential area within the Academy in Afaka. During the unfortunate incident, we lost two personnel and one was abducted.
The Academy in collaboration with the 1Division Nigerian Army and Air Training Command as well as other security agencies in Kaduna state has since commenced pursuit of the unknown gunmen within the general area with a view to tracking them and rescue the abducted personnel.
The NDA community and Cadets are safe in the Academy. We assure the general public that this unknown gunmen would soon be apprehended and the abducted personnel rescued.
Bashir Muhd Jajira
Major
Academy Public Relations Officer
24 August 2021.