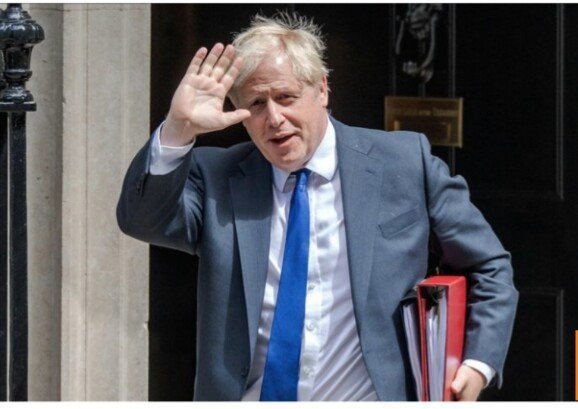 The British Prime Minister, Boris Johnson, has thrown in the towel in response to a revolt within his Conservative Party.

He said in an address to the nation today, July 7, that the process of choosing a new prime minister “should begin now.”
“It is clearly now the will of the parliamentary Conservative Party that there should be a new leader of the party and therefore, a new prime minister.
“The process of choosing that new leader should begin now.”

He said that the time line will be announced next week.
Johnson is not planning to leave office immediately, as he said: “I’ve today appointed a cabinet to serve, as I will, until a new leader is in place.”

In a televised speech outside 10 Downing Street, the outgoing leader showed that the appointment of new cabinet ministers means that the government can continue to function as he prepares to depart.
Johnson spoke of his attempts to stay on as leader and how “painful” it is for him to step down, but made no mention of the scandals that have proved his political downfall.
“In the last few days, I’ve tried to persuade my colleagues that it would be eccentric to change governments when we’re delivering so much… and when the economic scene is so difficult domestically and internationally.
“I regret not to have been successful in those arguments, and of course, it’s painful, not to be able to see through so many ideas and projects myself.”

He said, however that he’s proud of “getting Brexit done” and “leading the West in standing up to Putin’s aggression in Ukraine.”
Johnson went on to address voters directly, and expressed his sadness at stepping down after nearly three years in the role.
“To you, the British public, I know that there will be many people who are relieved and, perhaps, quite a few will also be disappointed.

“And I want you to know how sad I am to be giving up the best job in the world.”
Johnson has, in recent months, been engulfed in a series of scandals that forced even his most stalwart supporters to abandon him.
Nearly 60 members of the government, including five cabinet ministers have resigned since Tuesday, furious about the botched handling of the resignation by Johnson’s former deputy chief whip, Chris Pincher, who was accused of groping two men last week.
Johnson initially attempted to ride out the crisis, despite an unprecedented flight of middle-ranking ministers from the government, a battering at Prime Minister’s Questions and a bruising appearance before a committee of senior lawmakers in Parliament.

On Wednesday, he still insisted he wasn’t going to resign.
But Johnson finally gave in today after some of his most loyal allies told him that the game was up.
UK Foreign Secretary, Liz Truss said that Johnson had made the “right decision” to resign.

“We need calmness and unity now and to keep governing while a new leader is found.”
Greg Clark, newly appointed UK Secretary of State for Levelling Up, Housing and Communities, said that he had a duty to ensure that the country has a functioning government.
The leader of the opposition Labour Party, Keir Starmer, said that it is “good news for the country” that Johnson had decided to resign.

“That should have happened long ago. He was always unfit for office. He has been responsible for lies, scandal and fraud on an industrial scale,” said Starmer on Twitter.

The opposition leader also had scathing words for the Conservatives.

“They have been in power for 12 years. The damage they have done is profound. Twelve years of economic stagnation. Twelve years of declining public services. Twelve years of empty promises,” Starmer said.
“Enough is enough. We don’t need to change the Tory at the top; we need a proper change of government. We need a fresh start for Britain.”