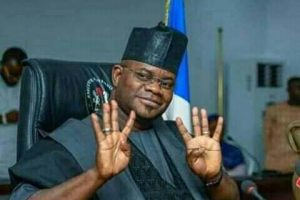 President Muhammadu Buhari has advised Yahaya Bello who has just been formally declared winner of the Saturday, November 16 election in Kogi State to be magnanimous in victory.

In a message of congratulation to the governor, who was re-elected for a second term of four years, asked him  “to imbibe the spirit of magnanimity in victory by extending a hand of partnership to opposition candidates.

The President advised those dissatisfied with the outcome of the election to approach the courts, even as he condoled with families of those who lost their lives in the violence that greeted the election in some parts of the State.

The President called on all political actors and stakeholders to take deliberate steps to eschew electoral violence as a peaceful and orderly process is vital to our quest for enduring democracy.

Yahaya Bello had earlier in the day, been declared winner of the election by the Independent National Electoral Commission (INEC), defeating his closest rival, Engineer Musa Wada of the People’s Democratic Party (PDP).

Garba said that Bello having scored the majority of votes and other constitutional requirements is declared the winner.