Home NEWS Buhari Asks Ministers To Handover May 28, Gives Reason Why He Didn’t... 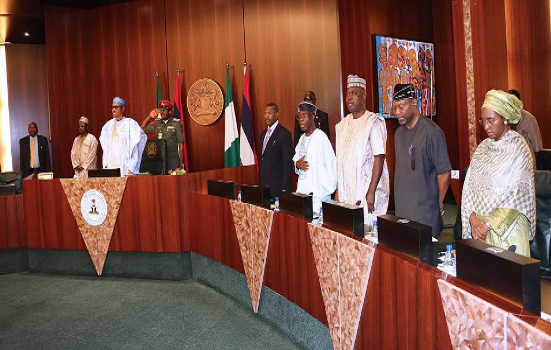 President Muhammadu Buhari has directed all the ministers in the Federal cabinet to hand over their offices to the permanent secretaries in the ministries on May 28, a day to his inauguration for a second term as president of the federal republic of Nigeria.
The President, who held the last Federal Executive Council (FEC) meeting with the ministers today, Wednesday, at the Council chamber of the presidential Villa, Abuja, said that the ministers would continue to function in their offices despite that today’s meeting was the last in the life of the administration’s first term.
The President said that he refused to reshuffle his cabinet for four years because every minister brought special knowledge and commitment into the government, and that he allowed such special attributes to develop fully for the development of the country.
At the meeting, which was tagged: “valedictory FEC meeting,” each minister took time to pour his or her heart out about the experience gathered in the federal cabinet and what were learnt from interactive sessions with the President.
The minister of foreign affairs, Geoffrey Onyeama in particular, described the President choice of his second in command, Vice President Yemi Osinbajo as the best, adding that it has been a dream team.
“It is a team made in heaven. Nigeria is now respected around the world because of your integrity.”
This was even as the minister of Labour and Employment, Dr. Chris Ngige said that his membership of the Federal Executive Council had provided him an opportunity to learn new lessons on good leadership.
He said that his closeness to the President had made him to know how simple and friendly the President is.
“When I tell people that the President cracks jokes and laughs raising his legs, many people don’t believe me, having had the memory of a tough military officer he used to be.
“I suggest that the President should organize a social gathering where he will crack jokes, laugh and raise legs, ” to which president Buhari, who was careful listening to each minister, smiled.
Minister of State for Petroleum resources, Ibe Kachikwu said that despite his position as minister of Petroleum resources, President Buhari never allocated any oil block to himself or any of his family members and friends, which he said, is very rare.
The ministers concluded that Buhari had introduced a new vista of service with no strings attached to the leadership, different from the past leadership style that placed emphasis on grabbing nation’s resources and giving friends, families and well wishers huge handouts.

Full text of President Buhari remarks at the valedictory session of FEC is reproduced here:
Today’s Federal Executive Council meeting is the last time we will meet as a cabinet before the commencement of the second and final term of this Administration.
Our first meeting in this chamber was in November 2015. Over the
past three and a half years, we worked together to deliver our campaign promises. I strongly believe that it is this team work that led to the successes recorded during our first term.
Some of our colleagues, with whom we started this journey, unfortunately are not here to join us in celebrating our successes.
Specifically, I must recognise our late brother, James Ocholi SAN who passed away in a fearful motor accident with his wife, Blessing and son, Joshua only four months after being sworn in as a Minister.
I want us to all put him, and indeed his family, in our memory. He was a true patriot committed to our CHANGE agenda.
I also acknowledge the contributions of other Council members who
resigned before the completion of our tenure to pursue other opportunities.
You will recall that when we started this journey, our country was
facing numerous challenges.
We inherited a broken economy which eventually went into recession in the second quarter of Fiscal Year 2016. The situation was further compounded by insecurity and massive corruption.
Many would have given up. Indeed, many outside commentators said
our situation was well nigh hopeless. However, we all came together and
pushed forward to deliver our campaign promise to rescue our country
from its parlous state.
Although we all had a common vision, we frequently had heated
debates in this room on the best way to achieve our goals. These
differing views are what made the decisions we took all the more
rational.
It is this quality that made me retain my cabinet for the full term.
Each of you in this room has a unique skill and strength. We are a
reflection of the Nigeria we aspire to achieve. A diverse but tolerant
nation where no one is silenced and where every opinion should be
heard and considered.
I want you all to leave this meeting proud to have served your nation to the best of your ability.
You should be proud to have been part of the Government that
liberated the local governments previously under Boko Haram rule.
You should be proud to have contributed to our food security and
economic diversification agenda which led to the revival of our rural
agrarian economy
You should be proud to have been part of the team that developed
the Economic Recovery and Growth Plan which led Nigeria exiting its
worst recession in decades.
You should be proud to have introduced the social investment
program that enhanced livelihoods of millions of Nigerians.
You should be proud to have participated in settling outstanding
pensions of many senior citizens abandoned by previous governments
while supporting state governments to meet their salary arrears.
And of course, you should all be proud to have overseen the most
ambitious road, rail and airport rehabilitation programs in the history of our country.
I want to put on record, that your achievements in the last three and
a half hears has guaranteed your position in the history books of this nation. You have certainly built the foundations for an improved economy and a more purposeful government.
Although today is our last council meeting, I expect all of you to
continue working until Tuesday, 28th May 2019 when you will officially
hand over your schedules to your respective Permanent Secretaries.
Your handing over letters should be submitted to the Office of the
Secretary to the Government of the Federation.
I want to conclude by thanking all of you for agreeing to serve our
nation during these difficult times. I want to use this opportunity to
recognise the silent partners to this cabinet, your spouses, families and friends, who supported you through these years.
I wish you the very best of luck and pray for your successes, for your families and our for country in the years ahead.

See also:  Nigeria On The Path To Greatness, Mine & Steel Minister Of State Assures

Thank you and God Bless the Federal Republic of Nigeria.