Home NEWS Buhari Describes Those Who Try To Intimidate Him In Office As “Clever... 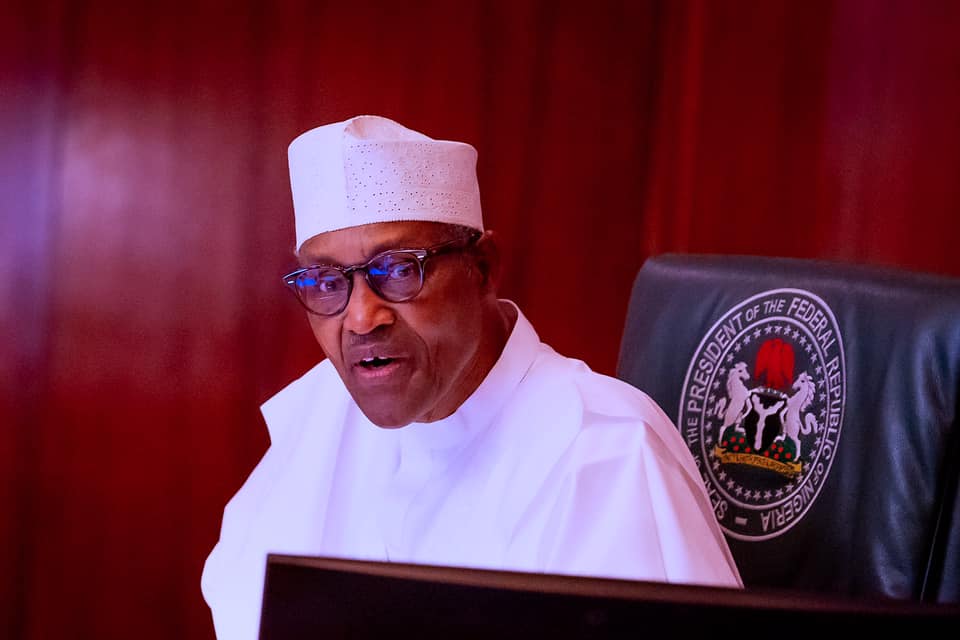 “There are people around that think that they can intimidate me to get what they want instead of going through certain systems to earn whatever they want to earn. And they are the same people who want to be clever by half.”
These were the words of President Muhammadu Buhari at a special event put together by his family and close associates to mark his 80th birthday. The event held last night, December 23, at the Presidential villa, Abuja.
The President opened up on the rumour that went round a couple of years ago that he was a person from Sudan, saying that he heard all that story.
“Yes! People said I am somebody from Sudan. I didn’t bother with the name. Some Nigerians have mischievous ways of explaining themselves.
“No. It is not funny because those who made those statements, they just want to be cheeky.
“They want to distract attention from the main issue. Our main issue is to do the infrastructure, make people aware that they need to work hard to live well; they just enjoy life without earning the respect of their community and so on.”
Buhari, who leaves office early next year after eight years as President, said that he would not miss much.
“I wonder if I am going to miss much. I think I’m being harassed. I believe I’m trying my best but still my best is not good enough.”
The President stressed that he is not bothered by criticisms, most of which are wild and unfounded, insisting that he would continue to do his best in service to Nigeria.
Vice President Yemi Osinbajo described the Nigerian leader as a forthright, good and kind man, as well as an exemplary leader.
He praised President Buhari for leading the nation with great courage, determination and commitment.
“I invite your excellences, ladies and gentlemen, to join me in proposing this toast to an exemplary leader, a forthright and honest man, a good and kind man, and a man who has led this country with great courage, determination and commitment for so many years.
“We pray that the almighty God will preserve his life for very many years to come and that he will live all of these many years in good health, peace, joy and with the love of all of our countrymen.”
Also eulogizing the President, Senator Ibikunle Amosun described the President as a man with an impeccable character and somebody that loves Nigeria..
“He is a man whom all of us; even his adversaries will agree that this is a man with a flawless character, a man with a good heart, very compassionate, very committed and a good listener.
“Somebody that loves his family, Nigeria; he is a nationalist. President Muhammadu Buhari will always think about others. In his own little way and even in his humorous way, he will always not just think about himself. He is somebody tha is not bothered about all these worldly things he is already a contented human being.”
Similarly, Ebonyi State Governor, David Umahi described President Buhari as a detribalized person that means well for Nigeria.
“Let me say here that the President is a very highly detribalized personality. He is a man that loves this nation. Every time you meet him, he laments about the level of patriotism of our people. You will see a man that has passion for the people of this country, a man that loves every section of this country.”
The Governor used the occasion to thank President Buhari for completing the second Niger bridge, which is now facilitating the movement of people and goods to the Eastern part of the country this yuletide season.
Presidential candidate of the All Progressives Congress (APC), Asiwaju Bola Tinubu, who also graced the occasion, thanked President Buhari for sacrificing a lot for the progress of Nigeria.
He said: “You have been at the helm of the affairs of this country at a critical time. We have seen a life of commitment, dedication, patriotism and honesty. Mr President, you have done well for your country. Our nation has seen the difference, the leadership that you demonstrate.”
The President’s eldest daughter, Fatima Buhari, who spoke on behalf of her siblings and the entire family, used the occasion to thank her father for investing in their future by giving them the needed training and caring for their wellbeing.
“We are deeply honoured to be here celebrating the 80th birthday of our beloved father. I thank almighty Allah for his mercy and grace, for giving our beloved father long life and good health.
“Baba is someone who money cannot buy. That is one thing we know and he taught us that. He taught us humility, loyalty, integrity, dignity and honesty and he has a very good sense of humour. He gave us everything a parent will give his child; love, care, good education, shelter and many more.”
There were goodwill messages from traditional rulers, who all eulogized President Buhari as a man of integrity and a huge sense of humour.
The Minister of Information and Culture, Lai Mohammed, led other members of the President’s cabinet as they presented a giant birthday card, as they rejoiced with him on his 80th birthday.
Governors who also graced the occasion were Aminu Masari of Katsina State, Atiku Bagudu of Kebbi and Dave Umahi of Ebonyi State.
At the event, a documentary was aired on the life of President Buhari from childhood.