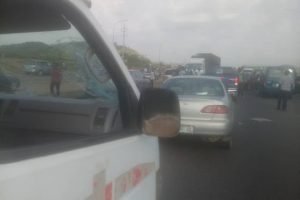 Driver of an Ambulance attached to Kuje General Hospital in the Federal Capital Territory (FCT), Abuja, narrowly escaped death in the hands of EndSARS protesters in Lugbe, airport road today, October 20.
Report reaching us at Greenbarge Reporters said that the glasses of the Ambulance were broken and was completely vandalised.
The Ambulance was said to have been dispatched by the hospital management to convey the medical staff of the hospital who were stranded in Lugbe as a result of the blockage mounted by the protester. 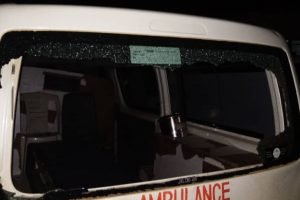 Some of the medical staff in the Ambulance said they jumped off the vehicle when the attackers came dangling cutlasses and other dangerous weapons, and ran into the bush.

The driver, who gave his name simply as Jibril, said that the Ambulance was completely vandalised, even as he escaped from the scene with minor injury.

“The protesters attacked only government vehicles,” the driver said.