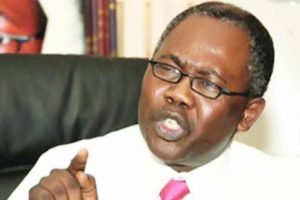 Former Attorney-General of the Federation and Minister of Justice, Mohammed Adoke has appeared, along with six others over the controversial $1.09 billion settlement agreement on Malabu oil block.
Adoke who was arraigned today, January 23 at the Federal Capital Territory High Court in Gwagwalada, pleaded not guilty to 42 counts of fraud and money laundering.
Other defendants in the charge are Aliyu Abubakar, Rasky Gbinigie, Malabu Oil and Gas Limited, Nigeria Agip Exploration Limited, Shell Nigeria Ultra Deep Limited and Shell Nigeria Exploration Production Company Limited.
The Economic and Financial Crimes Commission (EFCC) alleges that Adoke was connected with the controversial $1.09 billion settlement agreement on Malabu Oil Block.
The former AGF had been away from the country for four years after being part of the administration of former President Goodluck Jonathan.
The anti-graft agency accused the former justice minister of fraudulently allocating OPL 245.
Adoke was arrested on December 19, 2019, by the EFCC on arrival in Nigeria from Dubai.

See also:  Atiku Jubilates As Lawyer Bwala Crossed Over From APC To PDP