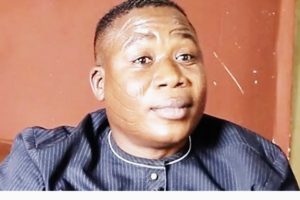 Yoruba Nation agitator, Sunday Adeyemo, popularly known as Sunday Igboho, has been arrested in Cotonou, Benin Republic.
Report reaching us at Greenbarge Reporters online newspaper said that he was arrested at an airport in Cotonou yesterday, July 19 in the night.
He was arrested by the security forces in Benin Republic about three weeks after the Department of State Services (DSS) declared him wanted for allegedly stockpiling arms.
It was learnt that Igboho will be repatriated to Nigeria today from Benin Republic, one of Nigeria’s neighbouring countries in the West African sub region.
“He was arrested in Cotonou while he tried to travel out on Monday night. His destination was Germany. The security forces in Benin Republic should repatriate him to Nigeria on Tuesday,” the source said.