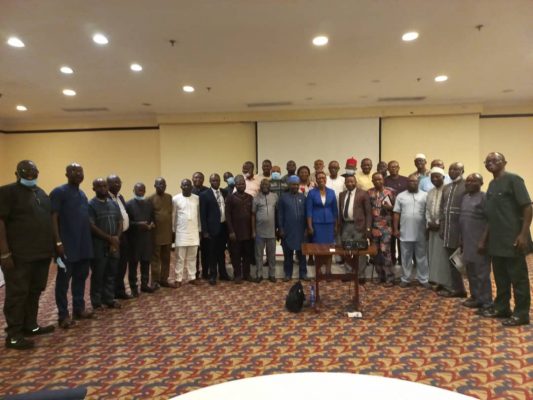 A one-time Editor-In-Chief of the Nigerian Tribune newspaper, Folu Olamiti and 20 other super Editors as well as renowned media managers have joined the Guild of Corporate Online Publishers (GOCOP). Olamiti was also until recently, Resident Media Consultant to the Independent Corrupt Practices and Other Related Offences Commission (ICPC).

They were inducted into the 65-member Guild at its 5th Annual General Meeting/National Conference held at Sheraton Hotel, Ikeja Lagos middle of last week.

Others who were formally admitted into the Guild are Dr. Ise-Oluwa Ige, a 2016 PhD holder in Journalism from the prestigious University of Ibadan who is former Editor of Authority on Saturday newspaper and former Editorial Board Chairman and Managing Editor of Daily Times; former Managing Director/Editor-in-Chief of the Sun Publishing Ghana Limited, and CNN African Journalist of the Year 2006, Shola Oshunkeye; a serial Award winner and one of Nigeria’s top investigative journalists, Dipo Kehinde and former Editor at Leadership newspaper and one-time spokesman for the Nigerian Minister of Science and Technology, Hassan Gimba

Also inducted were former Daily Editor of Newswatch newspaper and Communication teacher, Dele Fashomi as well as the following:

Rose Moses, a gender advocate and editor who started her journalism career in 1990 as Staff Writer with the defunct Satellite Newspapers Limited before she joined Champion Newspapers in 1993 till 2011, having also served as Managing Editor and member, Editorial Board was also on the list.

GOCOP, which now boasts of 86 members, was incorporated in 2015 by 11 professional journalists with the mission to sanitise online media industry in the country.

The journalists and publishers of separate online newspapers who came together at the time are as follows:

Malachy Agbo, formerly of THISDAY, now the publisher of The Citizen

Musikilu Mojeed, an award-winning investigative journalist and Editor-in-Chief at Nigeria’s Premium Times and former Investigative Editor of NEXT

Chijama Ogbu, Publisher of The Rainbow and ex-Business Editor, The Punch

Dotun Oladipo, Publisher of The Eagle Online, a former Sunday Editor of the Nigerian Compass

The pioneer President was Malachy Agbo while Musikilu Mojeed was elected Deputy President.

GOCOP is highly recognised as an assemblage of professional online journalists in Nigeria by government at all levels and private corporate organisations.