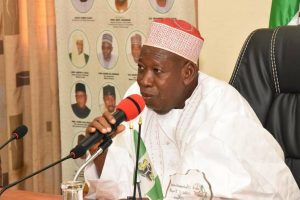 Governor Umar Abdullahi Ganduje of Kano State has formally declared free primary and secondary education in the state.
The governor, who spoke to newsmen shortly after leading some leaders to visit President Muhammadu Buhari at the presidential villa today, February 7, said that he would be needing the assistance of the federal government to fully implement the free education.
He said that under the new arrangement, every school going age in the state would be made to compulsorily enrol in school.
Governor Ganduje said that the over 400,000 out-of-school children would be reintegrated in the free education policy.
According to him, new classrooms will be built in addition to providing all other necessary items, including free uniforms and feeding, required for qualitative education.
He said that efforts would be made to also fashion Almajiri system into the new dispensation.
The governor stressed that with the free and compulsory education, the issue of teenage marriage amongst the girls would be eliminated, explaining that every teenage girl will be made to compulsorily go through at least, secondary education before marriage.