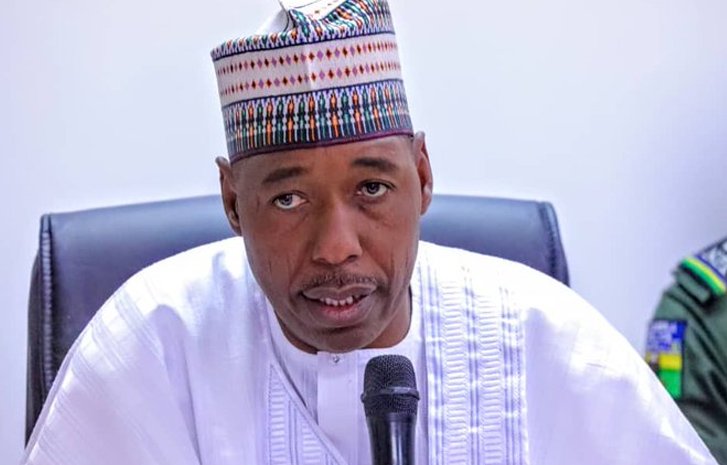 Governor Babagana Zulum of Borno State has confirmed that there are currently two local governments that are still under the control of Boko Haram terrorists in the State.

He said that the two local governments are Guzamala and Kukawa in Borno North, even as he assured voters of their safety during the February and March general elections.

Governor Zulum, who visited President Muhammadu Buhari at the Presidential Villa, Abuja today, January 6, told news men that there will be no problem.

He said: “In-sha-Allah, in Borno State, we don’t have any problem.

“The security situation has improved tremendously by over 90 percent, so we don’t have any problem. Eligible voters can go and cast their votes on election day.

Governor Zulum compared the security situation in 2015 and 2019 in the state, saying that there had been great improvement.

“Even in the developed world, we still have some pockets of insecurity. But by and large, we have succeeded a lot. Over 90 percent of our security situation has been improved.”

The governor appealed to the people to go to their wards to collect their PVCs to enable them to cast their votes in the forthcoming elections.

The governor said that rehabilitation and resettlement are ongoing, adding that all refugees living in Republic of Niger and Chad and Cameroon would soon be resettled in the state.

“The Federal government is supporting our mission of rehabilitating. But most importantly, we are yet to complete our resettlement project and very soon we will resettle victims of Gudubali local government area.

“We will resettle all our refugees that are living Republic of Niger and Chad and Cameroon. Mr. President has given approval to this effect and very soon we will complete the entire settlement

“Resettlement is not something that is easy, it will take a long time. But the most important thing is that those that are very much in need to be resettled will be resettled.

“But most importantly we have closed down all official IDPs camps within Maiduguri Metropolitan Council and Gere local government area, as I said, last one year ago.

“For now, we don’t have any official IDP camp within Maiduguri Metropolitan Council; the unofficial camps will also be closed in the next few months,’’ Zulum told State House correspondents.

The governor also promised to rehabilitate Maiduguri-Gamborun-Gala road and Maiduguri-Banke road to create opportunities for the people to earn livelihoods.