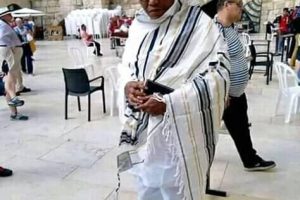 Conference of Igbo Youth Professionals Worldwide (CIYPW) has described the leader of the outlawed Indigenous People of Biafra (IPOB), Nnamdi Kanu, as a fugitive, fighting alone for cessation in Nigeria.
The group accused Kanu of relying on his citizenship of the United Kingdom and Israel to incite anarchy in Nigeria and causing problems for Igbos living in Nigeria through his persistent negative utterances.
President-general of the group, Barrister Maduabuchi Nwodo, in a petition asking the UK and Israel withdraw the citizenship of the IPOB leader, reminded the two countries that Kanu, as a fugitive, jumped bail in Nigeria after being charged with treasonable felony.
It also drew the attention of the two countries to the fact that IPOB had been designated as a terrorist organisation by a Federal High Court in Abuja, Nigeria.
“We are disturbed at the incessant inciting statements coming from Mr Nnamdi Kanu,who has been parading himself as leader of Indigenous People of Biafra against the Nigerian state.
“We are aware of his status as a citizen of both the United Kingdom and the Nation of Israel. Having worked and contributed effortlessly to see Nigeria at its present state,we believe that the United Kingdom and Israel would not want to see Nigeria a shattered place. It is in this regard that we are strongly appealing to them to rein in on Kanu, whose activities have been against the unity of Nigeria.
“The latest call by Mr Kanu on the police and military officers of Southern and Middle Belt extractions not only to abandon their duty post but to also resign and burn their service uniforms must be ignored. We wish to inform them that Kanu is alone in his cessation project and has nobody behind him.”