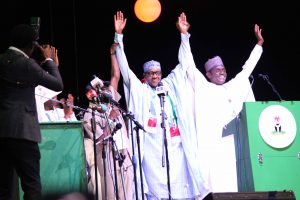 President Muhammadu Buhari has made it clear that if the All Progressives Congress (APC) had not won the 2015 Presidential election, Nigeria would have since gone bankcrupt even as the dreaded Boko Haram insurgents would have taken over the country.

Delivering an acceptance address last night (Saturday) after the delegates to the APC national convention affirmed him as its Presidential candidate for the 2019 election, the President insisted that the party had brought about the change it promised Nigerians in 2015.

“We can be proud of our achievements. CHANGE has come. Ladies and Gentlemen, fellow Nigerians, think how much PDP Governments earned between 1999 to 2015. Think what they did with it.

“Security down! 18 local governments of Nigeria under control of a hostile army of insurgents,

“Bankruptcy around the corner.

“What did they do with your money?

“Internationally, Nigeria is now respected. My inter-action with foreign heads of state and government has been very encouraging. The international community is very supportive of our efforts to put our country in order.”

President Buhari, who paid glowing tribute to the leadership of the APC right from the inception, including Asiwaju Bola Ahmed Tinubu, Bisi Akande, John Oyegun, confessed that there is no honour greater than the confidence given to him by members of the party when they affirmed his nomination and by their commitment to the CHANGE agenda.

“We have arrested and checked the slide to anarchy on the security and economic fronts.

“Boko Haram is reduced to dastardly attacks on soft targets. Normalcy has returned to much of North East and neighbouring North West states.

“Our currency has stabilized. Our reserves are now $44 billion, a lot higher than we had in 2015.

“Power generation capacity has reached 8,000 megawatts against less than 4,600 when we came into office. As we invest in new power generation infrastructure we are strenuously working to address the legacy deficiencies and challenges of transmission and distribution networks across the country.

“We have revived most of our capacity to produce fertilisers locally.

“The Government through its Anchor Borrowers Programme and other incentives has empowered more than 2 million farmers to go back to the land.  We now produce 80% of our rice requirements. Many farmers who nearly lost hope are now millionaires.

“We have introduced primary school feeding programmes to encourage attendance and enrolment. We also have introduced the conditional cash transfer to help small and medium businesses, the men, the women and young people who drive our economy.

“We have repaired and are repairing major arterial roads and starting major railway projects with the aim of linking the 36 states with efficient road and rail transportation systems.

“We are attacking corruption head-on. With international support we are recovering Nigerian stolen assets and applying them to infrastructural developments.

“Today the corrupt are facing the wrath of law and leakages have been generally blocked.

“Fellow party members, it is with a deep sense of humility that I stand before you today to accept the nomination of our party, the All Progressives Congress to be its candidate and flag-bearer in the 2019 presidential elections.

“I accept this honour as a tribute and mark of confidence to carry the responsibility as we all join hands to continue the good work of the APC government to 2023 and beyond.”