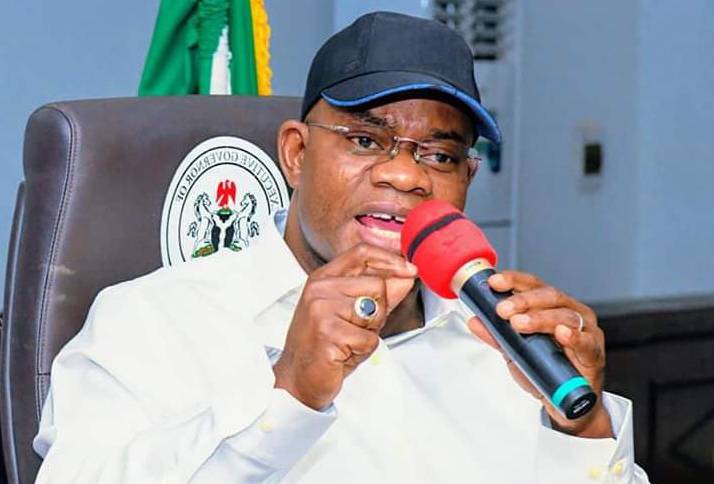 The governor of Kogi State, Alhaji Yahaya Adoza Bello has made it clear that he is now prepared to give bloody nose to criminals, bad people and those who are inciting others against his government.

Speaking in Egbira language while addressing the people of Ihima in the State recently, Governor Yahaya Bello said that he had tolerated those who have been inciting people against his government in the past, but that this time around, he would not take it kindly.

He also asked the people in the State to caution and restrain their criminally minded children and others, warning that anyone harbouring such criminals and bad people would be grouped together for necessary actions.

Parts of the speech is translated hereunder:

I want you to deny bad people their falsehood. When you are doing good thing, you are courageous.  A few years before now, there were some misunderstandings in the Ihima community but I want you to return to the glorious past where love reigned. Show clearly that Ihima is made up of people that love themselves.

When my government came, we insisted that we should not be hateful to one another; that we should not use clan as basis of division or for inter-relation amongst the people. When we came in, we began to construct roads, providing electricity, water, schools, hospitals and other infrastructure. Other governments before my government did not achieve one-third of my achievements, especially, in Egbira land. It is a truism that if you don’t have executive power, even if you are a Senate President, you cannot do all such developmental infrastructure.

Therefore, the power which God gives me is meant to develop the state and in doing so, we have heard all sort of criticisms. Some of our detractors were pointing dangerous fingers at us. We ignored such criticisms that are not justified. I continued to caution my people to ignore such critics because they didn’t know what they were doing.

But from henceforth, we will not tolerate dangerous fingers being pointed at us. This time around, even a bad finger pointed at us from the distance, we will chop off such finger. We will seek God’s backing, put our feet firmly on the ground and call to the gods and cut off the finger. It is not because of us; it is because we will not allow anybody to take us back to the bad past. God will not allow it.

We must complete our good plans for the state. We will not beg anyone to ask us to do the good thing we set ourselves to achieve. We must do it.

Therefore, the upcoming politics (campaign) will be hot for those who want to prove difficult; the good ones have no problem. For those who want to play hot, I will personally give them fire. I will personally be in the forefront with firelight to touch the side of the body of such bad people. Whoever survives should thank God. To be forewarned is to be forearmed. Before now, we used to appeal but now we are warning not begging.

After seeing what we are doing and what we have achieved, whether you are a man or a woman or Egbira or none Egbira, and you don’t acknowledge them, I’m ready for such people squarely. I expect all the traditional rulers, who are the owners of the communities, to begin to call everybody in their domains to caution their children that are bad. No father should allow his child to call him, because when a child is calling his father, it is a sign of bad omen.

May God grant our prayers in Mosques, Churches and through herbalists for good thing for individuals, because what I wish for myself is good thing. My mother asked me all through her to be doing good and that is what I will continue to do. My mother did not wish bad for anyone and so anyone who wishes me bad, such bad thing will go back to him…such bad person will go and lie with my mother (in the grave).

I’m fully ready from now on. If I send a message through anybody and the person delivers wrong message, he will see the other side of me. Even if you murmur inside your room and I ask that you should be brought to me and whoever fails to bring you should be ready to be dealt with in lieu of you.

That’s why I am saying it loud and clear for all the people in Kogi. The bad people who are determined to continue in their bad ways, some of them older than me, will see the other side of me. Let them know that I can hold “weree Chimengwu” (reference to gun in a slang) more than them.

I want you to record and play this message, and send it far and wide to them to hear me out. We have done good things and will continue to do them. Those bad people want to continue in their old ways and if I cannot defend the good things I have done in Kogi, then I will consider myself a failure. And I am not a failure.

When it is time, we will hand over to whoever we like, for them to continue with our good work. Whoever has bad habit, no matter how small, should stop it or be ready to vomit it by force.