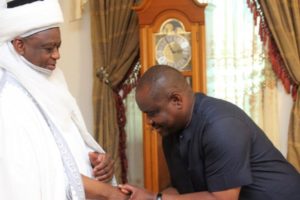 The Sultan of Sokoto and President of the Jaamatul Nasir Islam, the umbrella body of all Muslims in Nigeria, Sa’ad Abubakar, has said that he was pained and discomforted by the reported demolition of Trans Amadi central Mosque in Port Harcourt by the government of Nyeson Wike.

In a statement today, September 6 signed by the Secretary-General, JNI, Dr. Khalid Abubakar Aliyu, the Sultan said that the demolition of Trans-Amadi Mosque under whatever guise, “is without any doubt, painful.”

He said that Mosque has been described “by our revered Prophet, on whom peace and benediction of Allah will be upon, as Baitullah and house of Allah.”

The statement said: “Jama’tu Nasril Islam (JNI) under the leadership of His Eminence, Alhaji Muhammad Sa’ad Abubakar, CFR, mni, as custodian of the deen, the Islamic Religion in Nigeria, whose revered symbol is inherent in the Masjid, the Mosque, described

“However, at trying moments such as this, Muslims should be guided by the Qur’anic teaching of introspection and perseverance, truthfulness and sincerity. Such stand fetches for them Allah’s guidance on how the situation would be approached and solved.

“The above approach is to enable the Muslim Ummah to come together in unity under its leadership, which I swear in the name of Allah the Exalted, right from the time the dastard act of the Trans-Amadi Mosque demolition took place, is working round the clock in finding lasting solutions with wisdom, for what the Rivers State Government did, unfortunately, in order to forestall future occurrence of such abominable act in Rivers State and anywhere in Nigeria.

“Muslims are therefore called upon to be calm and restraint, and be prayerful, while the leadership seeks for concordant and accordant redress, within the shortest possible time frame in-sha-Allah,”