Home SPORTS I’m Positive Even If The World Crumbles In My Front – Defeated... 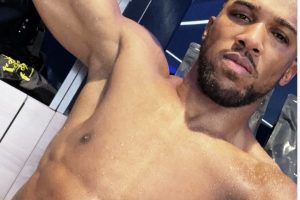 Nigerian-Briton combined Heavyweight Boxing Champion, Anthony Joshua has said that his defeat last night, September 25 by Oleksandr Usyk from Ukraine, did not shake him.
Joshua, took to social media immediately after his fight at Tottenham Hotspur stadium, London, with an inspiring message to “keep positive.”
Joshua lost his IBF, WBA, WBO heavyweight titles to the Ukrainian in front of a 65,000 crowd. He left the ring immediately after the judges decided in Usyk’s favour.
Joshua declared: “Keep positive even if the world’s crumbling in front of you! London I love you & thank you each and every time!”
The crowd desperately tried to inspire the defending champion, who needed a knockout in the final round.
But it was the challenger who almost found the decisive punch, pushing Joshua on to the ropes.
The bell saved Joshua from suffering another knockout defeat in his illustrious career after the first to Andy Ruiz last year.
Joshua was forced to fight the WBO mandatory challenger and former undisputed cruiserweight champion Usyk after his high-profile fight with fellow Briton Tyson Fury collapsed last summer.