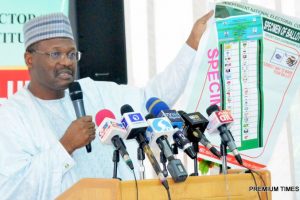 The Independent National Election (INEC) is obviously angry with the main opposition Peoples Democratic Party (PDP) over its allegation on Monday that the commission was working with the Buhari Presidency ‘‘to aid the APC to alter the results and announce APC candidates as winners’’ in last Saturday’s governorship and state assembly elections.

Responding to the allegations by the PDP that Professor Mahmood Yakubu-led INEC had become overtly partisan, by surrendering its independence to the APC, the commission regretted that the PDP has embarked on making spurious and libelous allegations at a time that it is busy trying to conclude the 2019 general elections.

In a statement today, Tuesday by the Chief Press Secretary to its Chairman, Rotimi Oyekanmi, INEC wondered why the PDP failed to accuse it of rigging in states where the party has won elections.

“So far, the PDP has won in Akwa Ibom, Ebonyi, Enugu, Oyo, Abia, Cross River and Delta states according to the results declared by INEC. Interestingly, the PDP has not accused INEC of rigging the elections in these states.”

“Sadly, the PDP has also not deemed it fit to commiserate with the families of our ad hoc staff and other Nigerians who lost their lives, including those who were injured in different parts of the country while trying to carry out their legitimate duties. This is rather unfortunate and regrettable.

“For the avoidance of doubt, the Commission’s one and only interest in the 2019 general elections is to make votes count. It is to ensure free, fair and credible elections. When there is no interference with the electoral process and an election satisfies the provisions of the law, the Commission will always make a declaration of the results. But when there is interference or when an election fails to meet the requirements of the law, the Commission will not make a declaration.”