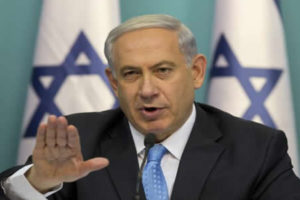 Israeli Prime Minister, Benjamin Netanyahu will reportedly be indicted on fraud charges related to his relationship with the owners of a top Israeli news site.

It was reported today, Thursday that the country’s top prosecutor plans to indict Netanyahu on a charge of bribery and two counts each of breach of trust and fraud. The news comes just weeks before Netanyahu is set to stand for reelection for a possible fourth term in office.

Police, according to NBC, said that Netanyahu used his relationship with the company, Bezeq to promote hundreds of millions of dollars’ worth of regulatory changes in the company’s favor in exchange for positive news coverage on Walla, a popular news site owned by the company.

Netanyahu has denied the charges and his party, the Likud Party, called the indictment “political persecution,” according to the Times of Israel.

“Nobody is surprised by the attorney general’s announcement that came after three years of relentless pressure on him by the media, the left and judiciary bureaucrats to indict the prime minister at any cost — even when there isn’t anything, just to have it happen before the elections,” the party said in a statement.

Netanyahu had previously predicted that the country’s police chiefs would recommend his indictment but had expressed confidence that Attorney General Avichai Mandelblit would not press charges.

“The State of Israel is a state of law. The law says that the one to determine whether there is evidence against the prime minister is the attorney general and he consults with the state attorney. The state prosecutor recently said in the Knesset that about half of the police’s recommendations end with nothing,” Netanyahu said earlier in February.

“So do not be nervous. … I am sure that at the end of the day the competent legal bodies will come to one conclusion, to the simple truth: There is nothing,” he added at the time.

Netanayhu is a top ally of President Trump, who praised the Israeli leader on Thursday while not commenting on the allegations.

A general election is scheduled in Israel for April 9. Netanyahu, 69, has called the allegations against him an attempt to remove him from office.