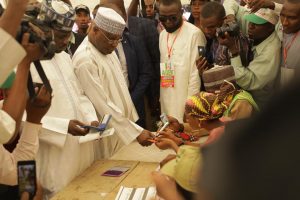 The candidate of the Peoples Democratic Party (PDP) in the just concluded Presidential election, Alhaji Atiku Abubakar, has lamented that he no longer have confidence in the electoral processes of the country.

Aatiku, who cast his voted in Saturday’s governorship and state House of Assembly elections in Adamawa State, stressed that he had lost faith in the electoral process, adding that he was sure if his vote will count.

Atiku who voted at his Ajiya Ward in Yola North Local Government Area, said that the poor turnout of voters was an evident of loss of faith in the electoral process by the people.

“The elections of two weeks ago were marred by irregularities. Suddenly, I’m not convinced that my vote will count. You can see a very low voter turnout.”

Atiku advised his supporters to keep faith with him, even as he emphasized that the electoral process had no faith.

He said that the situation could be rectified, but that it requires the coming together of all Nigerians and the leadership “to be able to redress all the challenges we face in the last elections.”