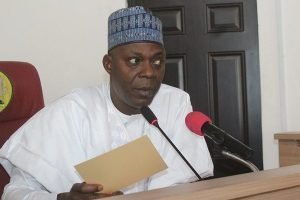 The Speaker of Kogi State House of Assembly, Matthew Kolawole, has blamed the previous government for the accumulated workers’ salaries that has given the state governor, Alhaji Yahaya Bello a headache.

According to him, while the immediate past administration paid between 25 and 30 per cent of local government workers’ salaries, the current regime had been paying 65 per cent of the salaries.

“The governor is presently working out plans to clear all outstanding salaries owed to state government workers in the next two months.

“It is not easy to run a state like Kogi with a huge debt profile, and so Gov. Bello is doing his best to uplift the living standard of its inhabitants.”

The speaker said that the state government is now using N840 million monthly to service loans inherited from past administrations in the state, adding that the amount was sourced from the state’s allocation from the Federation Account.

He said that governor Yahaya Bello’s administration inherited huge debts from loans obtained by previous administrations in the state, explaining that the loans accrued during the tenure of Alhaji Idris Wada, when the amount for servicing was about N700 million.

The speaker said that the amount increased to N840 million with the loans obtained by the regime before the present administration.

He explained that the debt servicing had adversely affected the payment of workers’ salaries and the overall development of the state.

Speaker Mathew Kolawole said that the state government would soon create over 10, 000 job opportunities through the Omi Rice project which would be inaugurated in the next two months.