Home NEWS My Husband Recovered From Covid-19 A Week Ago, But Died Of Complications 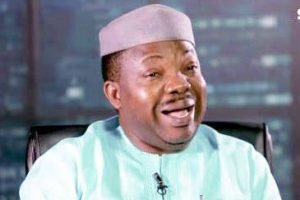 Dr. Joe Okei Odumakin, wife of the late Spokesman of Afenifere, a Pan-Yoruba sociocultural group, Yinka Odumakin, has said that her husband recovered from Covid-19 a week ago but died today, April 3 from respiratory issue.
Mrs. Odumakin who expressed gratitude to God for Yinka’s life explained that her husband died due to complications from Covid-19 which he had recovered from about a week ago.
She lamented that with the death of her husband, part of her was gone, even as she expressed appreciation to Nigerians for their sympathy.
The full text of her statement today, April 3, titled: ”A PART OF ME IS GONE!” goes thus:
With gratitude to the Supreme Being for a life well spent, I announce the passing on of my beloved husband, Comrade Yinka Odumakin to the great beyond after a brief illness.
”The sad event happened this morning (Saturday, 3/4/2021) at the intensive care unit of LASUTH where he was being managed for respiratory issues due to complications from COVID-19 which he had recovered from about a week ago.
”I appreciate the outpouring of grief and sympathy from home and abroad as I mourn my irreplaceable soulmate.
”I urge us all to remain steadfast in the cause of the masses to which he dedicated his life. Burial arrangement will be made public in due course.”
Meanwhile, Veteran Olawale Okunniyi, Convener of the June 12 Pro Democracy Movement of Nigeria has announced a seven-day mourning of Nigerian Pro Democracy Activists for the loss of Yinka Odumakin.

Okunniyi, who addressed Leaders of the June 12 Movement today, virtually said that Yinka Odumakin was one of the fiercest and most Prolific Comrades of the Pro Democracy Movement in Nigeria, who spent most of his adult life fighting the cause of a just and equitable Nigeria and therefore deserved to be immortalized by the Pro Democracy Movement.
In a statement by Obafemi Olubori, media assistant to the June 12 Pro Democracy Movement of Nigeria, Okunniyi was quoted inter alia as saying: “Odumakin and others in the National Conscience Party, NCP led by Chief Gani Fawehinmi of blessed memory teamed up with the Campaign for Democracy, CD led by Dr Beko Ransome Kuti in the 90s to flush military rule out of power. As fate would have it he met his heartrob and greatest supporter, Joe Okei in the cause of that struggle, which led to the restoration of the present Democratic rule in Nigeria”
“So he has paid his dues for Nigeria and deserves to be mourned and immortalized by the Pro Democracy Movement of Nigeria.”
Okunniyi said that the Movement, in the course of the seven days national mourning shall open condolence registers in its offices in Abuja and Lagos and shall expect Nigerian Pro Democracy Activists to adorn a spot of black in their outfit during the seven days period, which commences on Tuesday, 6th April to Monday, 12th April, 2021
“Finally, on behalf of the entire Pro Democracy Movement, commiserated with the Odumakin family, especially his wife, Joe Okei Odumakin, whom he called the pride of the civil society struggle and Afenifere, the Pan Yoruba Organization, which Odumakin served till he passed, praying that God grant them the grace to bear the huge irreparable loss of Yinka Odumakin.”